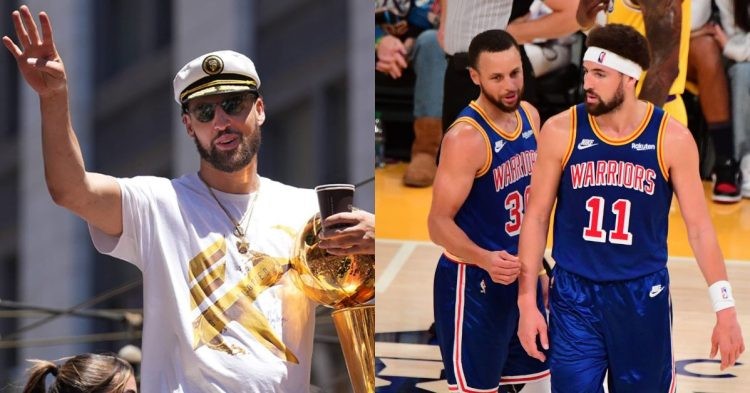 When you look at the Warriors dynasty and who it consists of, it will become clear to you that the Warriors wouldn’t have achieved as much as they have without Klay Thompson. Klay is one of the best shooters of all time, some even say he’s the second-best behind Stephen Curry.

He holds the record for most 3-pointers in a game with 14 threes made. The four-time NBA champion has achieved greatness on an NBA court, but today, we will be discussing something else. Let’s have a look at Klay Thompson’s NBA contract, salary details, and endorsements.

How much money does Klay Thompson make in NBA?

Klay has been with the Warriors his entire career, and his loyalty to the team has resulted in Championships and some huge contracts. Thompson is currently on a 5-year $189,903,600 contract.

Klay Thompson has a Shoe deal with Chinese company ANTA

Klay makes about $15M through endorsements each year, a large chunk of that is made through his shoe deal with ANTA. Over the years he has released multiple signature shoes under the brand. Apart from Klay, Gordon Hayward also has a shoe deal with ANTA

Thomson makes about $5M annually from all his different endorsement deals. He is the brand ambassador for Waiakea Water. He does commercials for Gillette. BodyArmor is actively promoted by Klay as his energy drink of choice. Klay works closely with Panini on trading cards and signed merchandise. He also actively promotes NERF guns.

Just want to make sure you’re all aware that Klay Thompson is now sponsored by Nerf pic.twitter.com/HqMnRCi1Hk

Klay is the Co-founder of Just Live CBD and has invested money in lots of different companies like Dapper Labs, Overtime, Sleeper, Carbon Health, Crosschq, and Sundae.

Klay Thompson and other star athletes are backing a new CBD brand.

Also, we haven’t mentioned Klay’s most prized possession yet, his boat which he rides across the bay to get to practice. Klay Thompson is one of the highest-paid athletes in the world and his team is one of the most successful teams in recent history. The Warriors have done it all and are hungry for more. If the team continues to dominate, Klay’s current net worth of $70M will surely continue to grow.