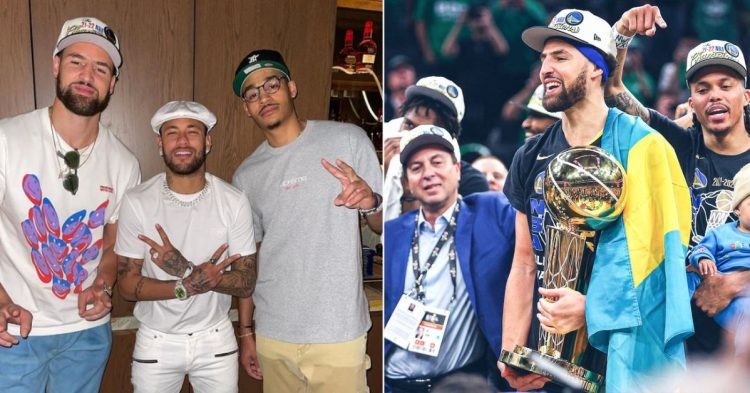 Klay Thompson, Stephen Curry, and the Golden State Warriors have won the 2022 NBA Finals. They eliminated the Boston Celtics in 6 games. GSW has made it back to the finals after 2019 when Thompson was injured. The shooting guard for the Warriors was found celebrating his accomplishment with old friend Neymar Jr.

It is interesting to note that athletes are close friends despite the sport they play. Neymar Jr has shown support for the Warriors in the NBA Finals. He was even present courtside in Game 2, where the Warriors got the win.

Klay Thompson struggled to find his rhythm and shot during several stretches of these playoffs. A huge reason for this is the devastating injuries he has suffered in the past few years. Not to mention the slow process of recovery. Therefore, it is remarkable that Thompson was even able to make it back to NBA shape.

This increases his feeling of accomplishment in him. He has been a key part of a Warriors dynasty that has won 4 championships in the span of less than a decade. Moreover, the path to the NBA Finals is rarely a given, and the Warriors were not favored to win it all entering the NBA season.

Klay posted a picture on his Instagram profile after the Warriors won the title. The picture has Neymar Jr, Jordan Poole, and himself posing in it. Additionally, there was a caption saying, “A1 since Day 1 @neymarjr “.

To those whom it is not clear. This implies that they have had a close\top tier connection since the very beginning. It is unclear when exactly this friendship formed between the two of them. Therefore it was surprising to see Neymar even go into the locker room to celebrate with the Warriors following their win in Game 2.

One must remember that the Warriors lost Game 1 at home to the Boston Celtics. Therefore, they were really not in a celebratory mood following winning Game 2. Perhaps, they were simply relieved to bring life back into the series. If they had lost that game they would have been down 2-0 heading into Boston.

Thompson and Poole were clearly ready to celebrate when they met Neymar after winning the series. It is obviously unclear what they were doing but we are sure they were having a good time.

Watch: Lebron James Pours One Out for All the Fathers With Inspirational Video on Father’s Day