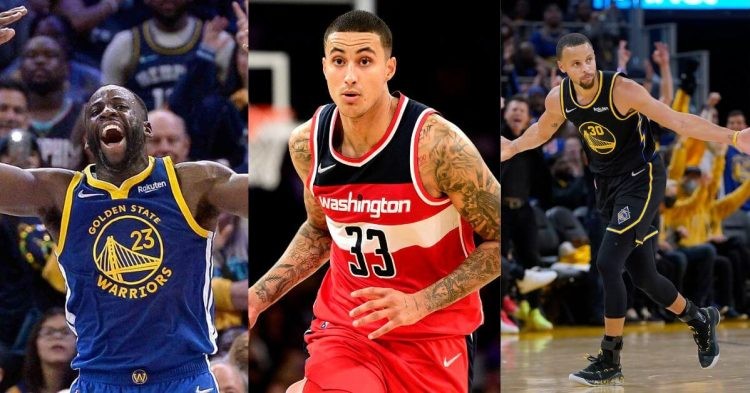 Stephen Curry, Draymond Green, and the Golden State Warriors are in the NBA Finals. Washington Wizards star Kyle Kuzma shared his perspective on Draymond becoming top 10 in assists in NBA finals history. One must wonder why Kyle chose to make less of this accomplishment by Green.

Draymond Green achieving this milestone is a testament to how many dominant finals runs the Golden State Warriors have had in his career there. Kuzma seems to think there is a very simple reason Draymond was able to make the top 10.

Congrats to @Money23Green of the @warriors for moving up to 10th on the All-Time NBA Finals Assists list! #NBA75 pic.twitter.com/7KMek8ZPCC

Simply put, Draymond is perhaps surrounded by the most talented shooters in NBA history. An assist is counted only when the ensuing shot is made. Curry and Thompson have been known to get lightning hot during stretches of the finals. They might just have the potential to convert bad passes into shots and make gold out of garbage.

This is exactly what Kyle Kuzma seems to think. His words when he found out Draymond made top 10 assists were. ” Listen, bro, I can DHO to Steph as well”. He followed this with three laughing emojis and concluded with “Congrats”.

Kuzma might have a point when he says he could potentially pull off what Draymond does. However, neither the stats, nor the actual logic of the game back him up perfectly. Firstly, Green is averaging 7 assists this season. Kyle is at exactly half of that with 3.5. Therefore, Kuzma is yet to prove he is a worthy facilitator of an NBA offense, whether it be dribble hand-off, over-head, whip around, or any form of assists.

Draymond is also much more physical, stronger, and a better defender than Kyle Kuzma. Therefore, he is an invaluable asset to Stephen Curry, Klay Thompson, and the Warriors. NBA Defense might seem to have nothing to do with facilitation and assisting the ball. However, the extra rebounds and hustle play that Green constantly goes out on a limb for are huge reasons why he has reached this milestone today.

Kuzma is still in the early stages of his career. Additionally, all said and done he has proven himself to be somewhat of a serious offensive threat at times in his career. However, to say he could replicate Draymond’s passes may be an exaggeration.