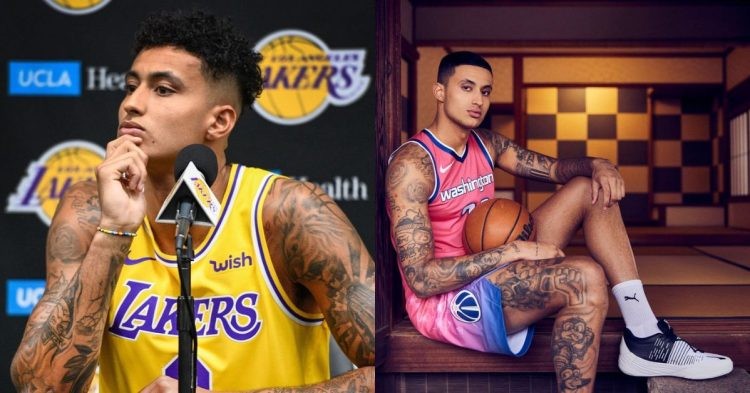 Kyle Kuzma of the Washington Wizards and from his time with the Los Angeles Lakers. (Picture Credit - Twitter)

The Los Angeles Lakers are for sure one of the greatest teams in NBA history. This alone puts a lot of pressure on each player that suits up for the Lakers. Kyle Kuzma, who himself is a former Laker recently shared his thoughts on what it was like to play for the Lakers under LeBron James. When LeBron is on a team they’re immediately expected to win which takes expectations to a whole new level.

A potential lineup of: Lonzo, D-Russ, Ingram, Zubac, Randle, Kuzma, and then just naturally acquired talent, that could have been a really fun team

Back in 2017, everything was going right for Kuz and the Lakers’ young core of Lonzo and Brandon Ingram. The entire landscape changed when LeBron arrived and Lonzo along with Ingram were all used to trade for Anthony Davis.

This is something that a lot of fans question, now that the Lakers are struggling. Kuzma went from being on a rebuilding squad to a championship squad within months. Here’s a tweet from 2019 that shows how often the Lakers let go of exciting young prospects in search of glory.

Over the last five years, the Lakers drafted:

If you slip up in a Lakers jersey the fans will never let you live it down. Let’s have a look at when and why Kuzma left the Lakers.

When did Kyle Kuzma leave the Los Angeles Lakers?

Kuzma who was supposed to be the Lakers’ best young prospect was put in a position to fail. You can’t expect a player as young as him to play on par with LeBron and help lead the Lakers to a championship. Also being a role player on the same team as LeBron was hell for Kuzma. When they won together, all people had to say was “LeBron is great” and when they lost it suddenly turned to “LeBron needs help”.

“I probably watched every Laker game [last year]. I haven’t really watched too much this year. Things are drastically different for sure… When you’re playing in LA, you’re always going to have a lot of drama.”

Kuzma who wasn’t doing too badly was harshly criticized for almost everything he did in the LeBron era. Eventually, Kuzma was traded to the Wizards after signing a 3-year extension with the Lakers in 2021. This change in scenery has done wonders for Kuzma. He has really flourished as a player ever since he went to the Wizards. Now, that Kuzma is doing well on another team some fans are salty about the trade.

You know what bums me out as a Lakers fan? Watching Kyle Kuzma ball out.

I was always a Kuz guy when he was in LA 🐐

Just this season alone he is averaging 18.1 points, 8.0 rebounds, and 3.1 assists per game. Every time the Wizards run the offense through him Kuzma truly puts all his potential and skill on display.