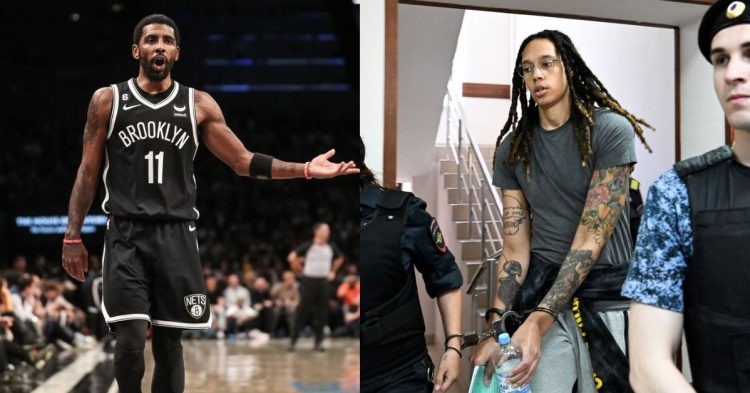 Kyrie Irving on the court and Brittney Griner in Russian prison (Credit: Twitter)

Brooklyn Nets star Kyrie Irving might not be approving of the decision to release Brittney Griner. Fans must certainly be aware of the drama surrounding the WNBA star. She was arrested earlier this year and imprisoned in Russia for up to 9 years for carrying concealed banned substances through a Russian airport.

Considering that the substance in issue was marijuana, a drug that Western Civilization tolerates to an extent, there was a lot of public sympathy over Griner’s situation. The same “public” must have felt relieved to find out that the United States finally engaged in a prisoner swap for Viktor Bout’s return to Russia.

However, it turns out that Irving might not be a part of the group that was sympathetic to her imprisonment. Fans might be curious as to what he had to say once it became official that Griner had been released and was on her way home.

How many months did Brittney Griner spend in Russia?

An argument could be made that Griner actually got off with a slap on the wrist. After all, carrying substances through an airport could prove catastrophic for a less influential person. Brittney was arrested on February 17th and sentenced on October 25th to 9 years in prison.

Be that as it may, she has been released in a little less than 10 months. All things considered, that is less jail time than what an American would go through in his\her country. Perhaps, this shows some form of favoritism and hypocrisy. Irving addressed this in his tweet.

Technically, Kyrie responded, approving a tweet, “Now free all our brothers and sisters that are not celebrity athletes.”. The Nets star responded to this with a peace sign and infinity emoticons.

Those who are familiar with internet slang will know those signs represent being in agreement. The tweet itself raises quite a valid point. Why should Brittney Griner alone be released when millions of others are locked up for the very same crime?

If the answer is around the lines of “because people know her” or “because she plays basketball”, we are certainly plenty of prison inmates who fulfill the same criteria. Just not at the same level as Griner. In any case, people should make peace with the fact that BG is returning, while several others are not.