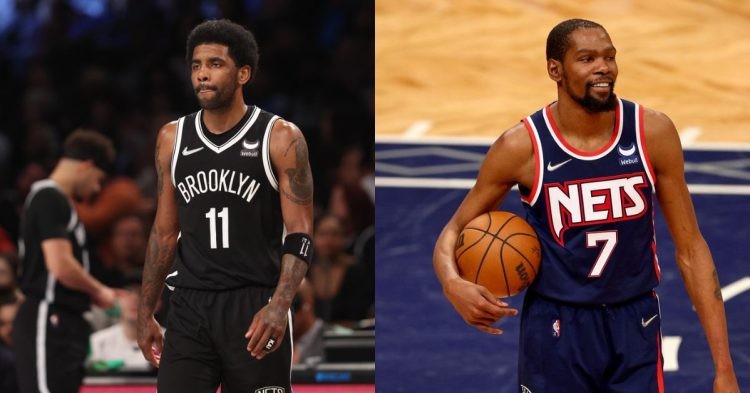 The drama going on in Brooklyn this offseason has the NBA world abuzz. NBA superstar and 2x Finals MVP, Kevin Durant has requested a trade from the Brooklyn Nets. This is despite still having to play for them until 2026. Several members of the media were under the assumption that Kyrie Irving played a huge role in Durant’s decision to leave.

Kyrie is quite a personality, to say the least. However, there is no denying his basketball genius and otherworldly talent. He shares the same concerns that  KD voiced in his meeting with the Nets owner. Both superstars have a problem with their coach Steve Nash and general manager Sean Marks.

One must wonder how much truth there is to this. People have an innate tendency to shift blame away from themselves. Be that as it may if both superstars claim that something is wrong with the management, how much of what they say do we take seriously?

According to “The New York Post“, there are sources close to the Brooklyn Nets organization who claim that Kyrie dislikes the coach and GM. There are several theories in the air and people wondering whether these claims are true.

Unfortunately, it is difficult to assess the truth behind these sources. Even if Kyrie has expressed dislike towards something Nash or Marks did, it does not mean he hates them completely. Yet, even if The Post never revealed this nugget of information, we would already know Irving has a problem with his team’s management.

One could easily claim that the Nets were being taken for granted by the two NBA stars. The Nets management is not completely blameless in this whole situation. Firstly, they forced Kyrie to sit out of the season due to him not taking the vaccine. Then they asked him to come back midway through the season.

No one ever knows the full story. It is impossible to verify conversations between Steve Nash, Sean Marks, and Kyrie Irving. We know they wanted him to get vaccinated and commit to the team. Irving also claimed in the past that this team “does not need a coach“.

A few days ago, everyone thought Kyrie and KD were going to part ways after just 2 NBA postseason runs together. However, today both of them have each other’s backs and are blaming the Nets management for this whole ordeal of the last few years.