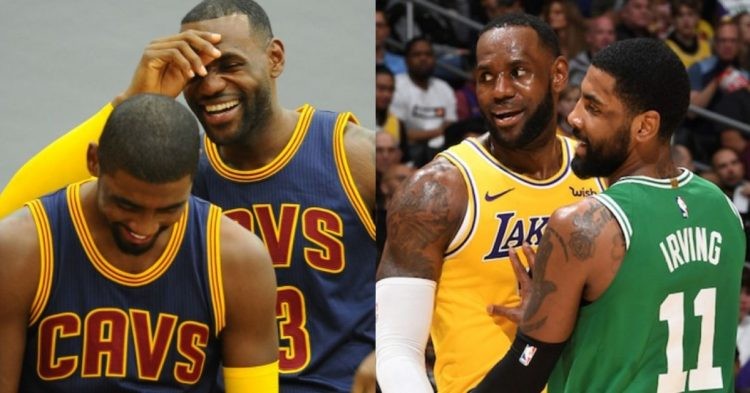 Kyrie Irving is one of the most controversial players currently in the league. He’s an NBA champion, All-NBA player, all-star, and a former teammate of LeBron James. LeBron and Kyrie played together in Cleveland for 3 years. And Irving confirmed that LeBron orchestrates how the team gets structured.

The Cleveland Cavaliers saw their star boy LeBron James leave in the 2009-10 NBA season. NBA repaid them by awarding them the first overall pick in the 2011-12 NBA season. They drafted Kyrie Irving who had big shoes to fill. But Irving then turned into an all-star and attracted LeBron back to Cleveland where they played 3 seasons between 2014-17 and won one of the most impressive titles of all time.

When LeBron James and Kyrie Irving played together they made the NBA finals almost instantly. They were the team that went head to head with the Golden State Warriors dynasty year after year. Irving and LeBron created a great one-two punch that came back from being 3-1 down against the 73-9 GSW.

The Flat Earth enthusiast did not want live in the shadow of King James anymore and left to join the Celtics to carve out his path. Their relationship since then has been up and down but not broken. Even recently they’ve had back and forth but Kyrie was the last to speak on this matter.

“I definitely feel like me learning from him helped us accelerate my understanding of the game…So not only was he teaching me off the court but on the court, this man is a savant, he’s a genius in terms of how he prepares…what he does every single day to be at the top, to stay at the top.”

Kyrie Irving then went on to talk about how LeBron helped create the 2015-16 Cavaliers roster that achieved the impossible. ‘LeGM’ was a nickname coined by NBA Twitter because of this very thing. He’s been known to alter the roster to his liking and leave no assets for the future. It’s been a boom and bust for him. But Irving let everyone know that ‘LeGM’ is not a myth but something that happens.

The meme turns into reality and created one thing for fans to love about Kyrie Irving.