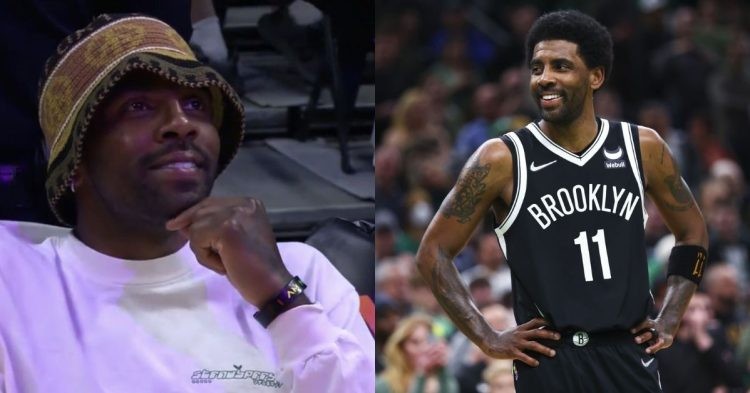 Kyrie Irving has been in the news for a while now. He was in the middle of a saga with the Brooklyn Nets when he refused a vaccination. He missed a significant number of games because of this. Earlier this year, rumors said that a reunion of Kyrie and LeBron James was possible with the Lakers. Kyrie played along with it until the last minute. He opted in as he decided on a final year in Brooklyn.

However, things have changed direction now. Kyrie’s compatriot, Kevin Durant decided it was time for him to go and submitted a trade request. That means Kyrie was the only one left on a team that needs some serious rebuilding.

Kyrie Irving to LA Lakers – move still on the cards?

Last night, the 30-year-old attended an LA Sparks – Seattle Storms game. The Storms won the matchup comfortably with a 37-point difference. Although the game was quite interesting, all eyes in the arena were on one man.

Kyrie attended the game in LA in the middle of a rumor fest that the Lakers have decided to go for him. He still is a player to be feared despite his form and age. Irving managed to average 27.4 points, 4.4 rebounds, and 5.8 assists per game in 2021-22. He made these numbers despite missing games regularly.

The fact that he attended the game becomes more interesting once you manage to connect the dots. A few hours before his unexpected attendance, reports emerged saying that the Lakers had decided to have a face-to-face conversation with Sean Marks and the Nets team.

Report: Lakers will have face-to-face conversation with Sean Marks and Nets to see if they can get a deal done for Kyrie Irving, per @mcten

If LA feels there won’t be a trade, they will shift their focus to Buddy Hield and Eric Gordon. pic.twitter.com/odjobXlgQB

Kyrie appearing on live TV in LA only a few hours after these reports only fuels them. Perhaps the teams came to an agreement and Kyrie was in the city to sign with the Lakers? Or he just came as a spectator? One thing is for sure, the move to the Los Angeles franchise looks to be inevitable for him at this point.