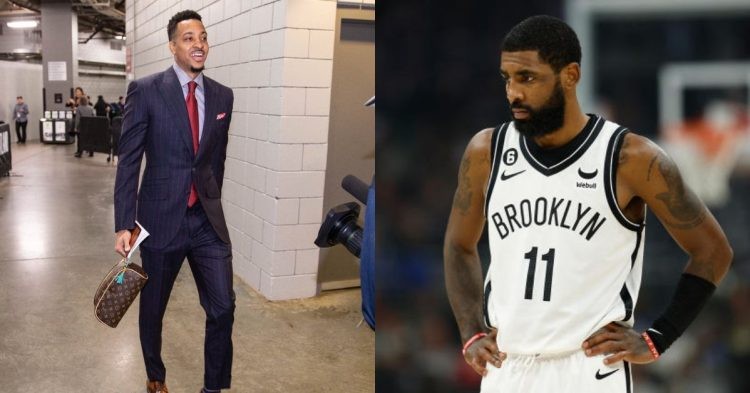 CJ McCollum in a suit and Kyrie Irving on the court (Credit: Twitter)

CJ McCollum is an NBA star currently playing for the New Orleans Pelicans. NBA fans will best remember him for his time alongside Damian Lillard and the Portland Trailblazers. The Kyrie Irving anti-semitic issue has garnered the league’s attention. Several prominent personalities from league officials to players have shared their thoughts and opined on this issue.

Some players like Kevin Durant initially defend Irving, while others like LeBron James said they didn’t respect what Irving did. With that being said, one may wonder if CJ had a take on this situation and which side he is rolling with in this situation.

The NBA media are talking to all the players and getting their takes and opinions on what Kyrie Irving did. They did the same for CJ in a postgame interview after the New Orleans Pelicans lost to the Atlanta Hawks. It would interest many people to know that CJ is the President of the NBPA (National Basketball Players Association). Thus, it made sense to question him on this subject.

After Kyrie’s suspension, NBPA President CJ McCollum said players need to be more mindful of what they post on social media.

“You have to know exactly what it is, and you have to do your research.” https://t.co/fFoSbhxJoR

We already have Irving’s side of the story on how he found out about the documentary and decided to share it. Be that as it may, McCollum claimed that he feels Irving didn’t even watch the movie before deciding to support\ promote it. He went on to turn this into a lesson that other NBA players should learn from and not repeat.

Last night, CJ McCollum, the president of the NBPA, said he hopes the Kyrie situation can be used to help all players moving forward.

“You have to be careful with what you’re posting. You have to know exactly what it is…”https://t.co/D44ZMPvwW4

Additionally, CJ also went on to say that since Irving has apologized, he believes they are heading in the right direction. However, he is yet to release an official statement as the president of the NBPA. He has claimed that he is still in the process of gathering information and learning about this issue.