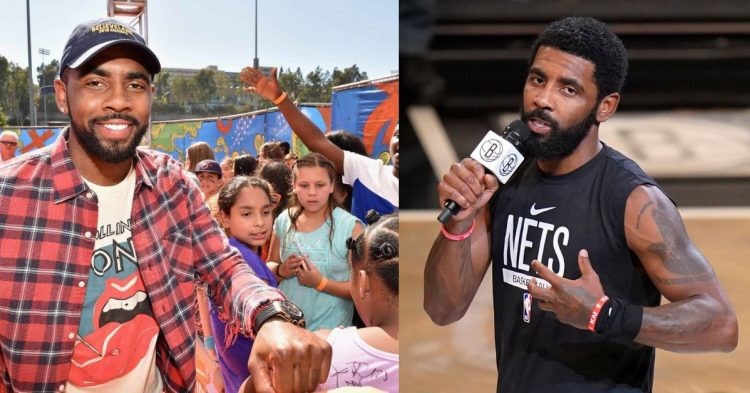 Kyrie Irving on the court and outside it in street clothes with children (Credit: Twitter)

Kyrie Irving is quite a controversial and polarizing figure. He has shown to be somewhat radical and erratic at times, especially with the recent antisemitic accusations. However, it would interest NBA fans to know that he is probably one of the most philanthropic and generous players we have ever seen.

In this day and age, people say and do things simply because of “how it will look“. Simply put, celebrities and personalities do things in order to be perceived in a positive manner. Be that as it may, Irving has not really acknowledged the fact that he donated more than $2 million towards noble causes. Moreover, this was just in the 2020-2021 NBA season.

That makes us wonder how much Kyrie could have potentially done for the good of society after becoming a professional basketball player. We should wonder what special causes he spent this large amount of money on and the significance behind them.

Kyrie is certainly one of the most successful and well-off athletes in the NBA. After all, his transcendental talent and unreal ability on the court are second to none. Despite having made hundreds of millions of dollars throughout his playing career, Irving currently has a net worth of around $90 million.

We would expect it to be higher under normal circumstances. After all, how could Kyrie Irving not even be worth 10% of what his former teammate LeBron James is currently worth? The only conclusion presentable is that Kyrie simply does not care about money and expanding his business empire.

That would certainly make sense and explain his philanthropic and giving nature. Here is a list of good causes that the Brooklyn Nets star has donated to in the 2020-2021 NBA season.

One could certainly spend a while debating which one of these causes is most noble. We should certainly thank Kyrie for being a good man and role model that the rest of the world can follow. However, since he never really did this for acknowledgment, perhaps giving him silent respect is all we should do in this situation.