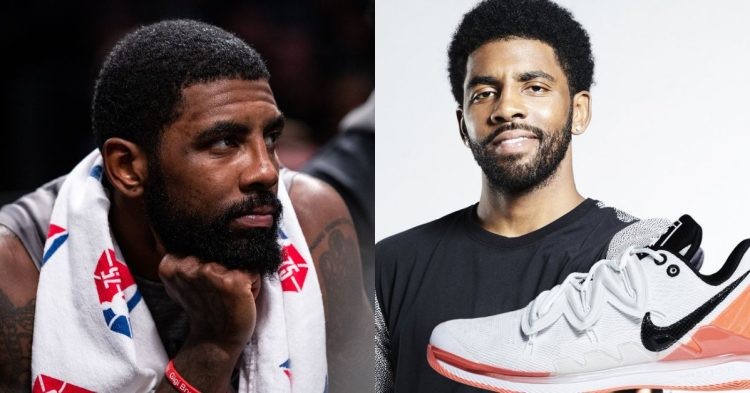 Kyrie Irving is the hottest topic in the media right now. He has had an eventful week since posting a tweet about a movie with anti-Semitic remarks in it. Since then, the entire world has turned against him. Many called him out for refusing to apologize, which prompted Kyrie to defend himself saying that he isn’t anti-Semitic. However, following that, the Brooklyn Nets organization suspended him for lack of accountability.

It seems like that was when Irving decided to put an end to it by apologizing publicly. He mentioned that he will fight against anti-Semitism and should have clarified his opinions on the movie before sharing it with the world. To the world’s surprise, it did not end there. The world-famous brand, Nike has decided to take matters into its own hands.

Nike has announced it is suspending its relationship with Kyrie Irving “effectively immediately” and will not launch the new Kyrie 8 pic.twitter.com/Pr6lA7enl3

The American brand chose to suspend its contract with Kyrie amid his recent controversy. In addition to that, the brand has also mentioned that the next shoe in Kyrie’s signature line; Kyrie 8s, will not be released.

How much money will Kyrie Irving lose after Nike suspends him for links to antisemitism?

“At Nike, we believe there is no place for hate speech and we condemn any form of antisemitism. To that end, we’ve made the decision to suspend our relationship with Kyrie Irving effective immediately and will no longer launch the Kyrie 8,” the brand said in a statement.

Now that Irving has lost his biggest brand endorsement deal, it seems like he will be going through what Kanye West went through a couple of weeks ago. For context, Adidas dropped Kanye and the rapper lost his billionaire status in just over a few days.

Kyrie Irving was hoopin today in the Kyrie 8s again 👀👀

Similarly, the Nets star will be losing a huge chunk of money as well. According to various reports online, Nike was paying around $11 million per year to the former Cleveland Cavaliers star. The parties signed the contract in 2014 when he was in Cleveland. It seems like the shoemaker has put an end to an 8-year relationship with Irving.

If that wasn’t bad news for him already, the Nets also suspended the 30-year-old for a minimum of 5 games. The player will also be losing a whopping amount sitting on the sidelines.

According to various reports, Kyrie receives about $425,000 per game. If we do the math, he will be losing out on at least $2.1 million due to the suspension. The Nets board is yet to decide if his apology will be taken into consideration to welcome Irving back.