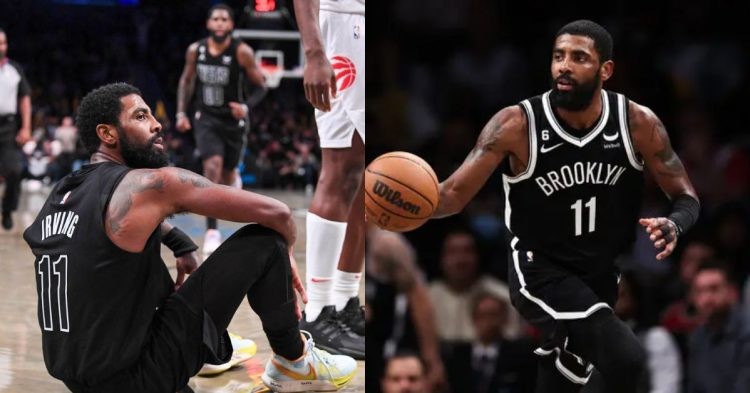 The Brooklyn Nets are already facing difficulties with Kevin Durant out for them. Durant suffered an MCL injury against the Miami Heat when he collided with Jimmy Butler. This injury made things worse for the Nets, as it will keep him out for a month. However, heads turned toward Kyrie Irving to lead the team and keep the momentum going, sadly he too is facing injury concerns.

The Nets have now lost three straight games in the aftermath of the right knee injury projected to sideline Kevin Durant another three weeks.@krisplashed https://t.co/ObwoWPdi3J

If things weren’t already bad for the Nets with Durant out for them for a month, their other superstar Kyrie has picked up an injury. The Nets are on a 3-game losing streak without the Slim Reaper, and things are about to get worse. Kyrie is the one everyone turned to when Durant’s absence hit the Nets, however, he couldn’t keep the momentum going.

The Nets faced the San Antonio Spurs last night, and Kyrie didn’t make the cut due to injury. They lost 106-98, it is a decent scoreline, against a low-performing team. Kevin and Kyrie are the team’s top scorers, with 29.7 and 25.6 point averages per game. No other player comes close to them, Nic Claxton comes third to them with an 11.9-point average.

The Nets coach Jacque Vaughn isn’t too concerned with Kyrie’s injury. Stating, “Just reported a little tightness,” Vaughn said. “It’s essentially just day-to-day. We’ll check on him Wednesday, and hopefully, this is short-term.” Whatever the case may be, the Nets find them in a huge hole, falling from the second seed to the fourth, and possibly even lower.

What injury did Kyrie Irving suffer?

The Nets, before the game against San Antonio Spurs, downgraded Irving’s injury status from questionable to Out. This is the 11th game Irving has missed for the Nets this season. Irving is out due to right calf soreness. The coach believes that he will make a return soon. However, this may not be the case and Irving might be looking at a longer absence as expected.

Nets trail Spurs, 27-15, at the end of the first quarter. Without Kevin Durant (MCL) and with Kyrie Irving (right calf soreness) a late scratch, Brooklyn is unable to generate offense.

Nets have just 1 assist. Ben Simmons is 2/6 with 4 points and 3 turnovers. It’s ugly

Irving is the Nets 2nd member of their big three. With him and Durant out, Ben Simmons is the only one for the Nets to be on the court to make the difference. The Nets are luckily at the 4th seed, if things take longer than expected for them, there is a huge possibility that they may fall to the 6th seed. The Nets will be hoping for a speedy recovery from Kyrie.