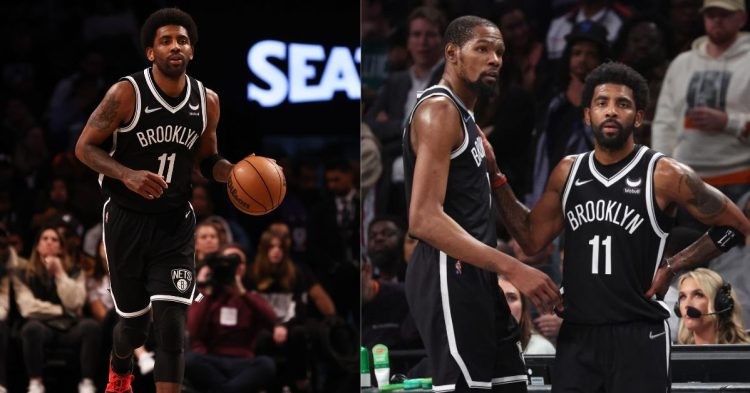 The Kyrie Irving situation has been a roller coaster for the whole of the NBA. Initially, he chose not to receive a vaccine during the peak of the pandemic. Sports had to be resumed and the New York law stated that all staff had to be vaccinated. Kyrie’s decision caused him to miss a significant number of home games for the Brooklyn Nets.

Once that saga was over, another one started. Kyrie was looking for a team that would sign him from the Nets. It was months of trade rumors. Many teams were reportedly interested in Irving, but to no avail in the end. The American eventually opted in to stay with the Nets a couple of months ago.

After he had chosen to stay, Kevin Durant decided it was time for him to leave. Now, we know it does not really make sense for KD to leave after his only good friend on the team had decided to stay. However, Durant still went on to submit a trade request, sending the NBA world into a frenzy. His decision prompted Kyrie to consider other options as well.

The LA Lakers were rumored to be the frontrunners to land Kyrie’s signature. It seems like LeBron James wanted to reunite with his former Cavaliers teammate. The Lakers were planning to include Russell Westbrook in the deal. Russ has had a hard time adjusting to the LA team and has had the hardest spell of his career.

However, it seems like Kyrie Irving might be staying with the Lakers after all. The Nets are not budging and they are firm in what they want for their team. Shams Charania reported on the Pat McAfee Show that Kyrie has accepted that he will be playing for the Nets next season, even without Durant.

He reported, “Kyrie Irving opted in with the full intent of playing out next season as a Brooklyn Net. In his mind, he’s playing next year in Brooklyn with or without Kevin Durant.” Moving on, Charania did not rule out a possible situation where the Nets accept a deal for KD.

“Kyrie Irving opted in with the full intent of playing out next season as a Brooklyn Net. In his mind, he’s playing next year in Brooklyn with or without Kevin Durant.”

He mentioned, “if Brooklyn does manage to find a deal for Kevin Durant before the season, could they then look to pivot to move Kyrie Irving, I mean for sure anything is possible”. Earlier this month, reports said that the Lakers were offering them Russ, a first-round pick, and a pick swap to get Kyrie.

However, that wasn’t enough for the Nets, who rejected the deal. As time goes on, it seems like Kyrie has accepted that he is more than likely to stay in Brooklyn. If we look at it from the Nets’ point of view, it’s understandable. Last year Kyrie and KD could not play that much together. In three years, they only played with each other for 44 games.

Next season, they’ll have Ben Simmons back on the team. Now, if you’re a Nets fan, a team with Kyrie, KD, and Simmons would surely excite you. It is clear that Sean Marks is aiming for an NBA title. And if they manage to get their cards right, they might even go ahead and do it with the team they have now.

And it looks highly likely for KD to stay as well, as the Nets seem to be very ambitious for every offer they receive for him. If they manage to keep hold of Durant and Irving for one more season, that will be an effective move for the team.