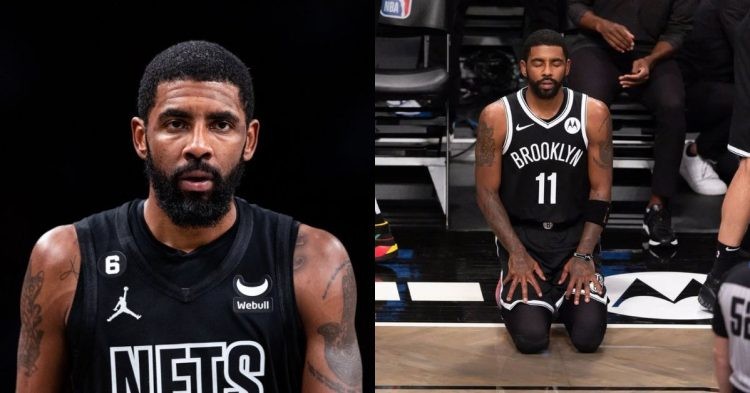 Kyrie Irving has been a player who has always found himself amid controversy. A huge example of that would be when he refused to receive a vaccination, despite the harsh criticism he got from the whole NBA world. Similarly, he has done that yet again. Recently, the Brooklyn Nets star promoted a movie with anti-Semitic views on Twitter. Since then, the entire eye has been looking at Kyrie.

After the NBA warned him and the Nets board decided to suspend him, Irving issued an apology. He mentioned that his only intention was to support his heritage and not to cause hurt to any religious beliefs. That brings us to one question; what religion does Kyrie follow?

When did Kyrie Irving convert to Islam?

In 2021, many speculated that the Nets star became a Muslim after he kneeled before a game. The main reason for the rumors was the fact that Muslims practice this as part of their prayers mainly. Moreover, Kyrie later disclosed to the world during a press conference that he had converted to Islam.

Kyrie talked about fasting for Ramadan after the Nets’ win over the Celtics.

“Just really blessed and grateful to be taking part in this.” pic.twitter.com/CKKppFmx6f

“All praise is due to God, Allah, for this… For me, in terms of my faith and what I believe in, being part of the Muslim community, being committed to Islam, and also just being committed to all races and cultures, religions, just having an understanding and respect. I just want to put that as a foundation,” Irving said.

Kyrie revealed at that time that he was taking part in fasting. The Nets guard said, “I am taking part in Ramadan with a lot of my Muslim brothers and sisters. And it’s been an adjustment. That’s really what I can say. It’s just being committed to my service to God, Allah, and then continuing on with whatever I’m guided with.”

The NBA star has come out and mentioned in the past that he was even playing while fasting. Now that might seem like an easy task. But to perform on one of the biggest stages in the NBA while not being able to drink or eat for the majority of the day is no ordinary feat. It is no secret that Kyrie is committed to everything he believes in, and his religious beliefs are no different.