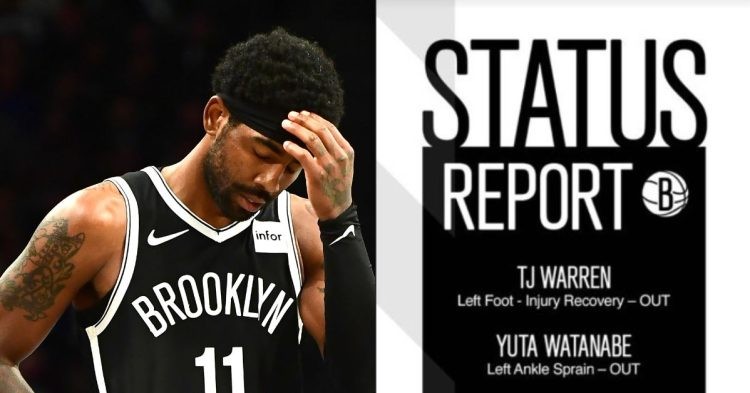 The Kyrie Irving controversy has kept the NBA world on its feet. A couple of weeks ago, Kyrie posted a tweet where he promoted a movie with racist and anti-Semitic remarks. The basketball world was quick to condemn him, including NBA commissioner Adam Silver and Brooklyn Nets owner Joe Tsai. The Nets guard’s controversial remarks regarding the issue earned him plenty of hate, even after his public apology.

Since then, Kyrie has been under the spotlight for his take on the controversy. However, the Brooklyn Nets suspended him for a minimum of 5 games and provided him with a list of things from their side for Kyrie to play for the franchise.

When will Kyrie Irving be back for the Brooklyn Nets?

Recently, the official Brooklyn Nets’ Instagram handle posted a story of the team’s status report ahead of their game against the New York Knicks. On their injury report, only Yuta Watanabe and T.J. Warren are out apart from Kyrie. However, fans took this as a sign that Kyrie might be removed from the roster altogether. This came after the recent rumors that Kyrie didn’t want to agree to the things that the Nets proposed.

At the time, some thought that the 30-year-old will be playing again for the Nets. The reason for that would be the fact that the story mentioned “Status Report” and not “Injury Report”. Later on, the rumors were buried by a New York-based reporter Ian Begley.

The most recent injury report posted on the NBA’s media site lists Kyrie Irving as out for tonight’s Knicks game due to team suspension. So at the moment, there is no change in Irving’s status. The injury report on Nets’ Instagram account notes statuses only for injured players.

He mentioned that the Instagram story only includes the injured players into account and not suspended players. Moreover, the Nets announced that Kyrie will be suspended for at least 5 games. The last time the American featured for the franchise was in the 99-108 loss against the Chicago Bulls. He made only 4 points, 6 rebounds, and 7 assists in 31 minutes played.

The Nets have played 3 games without one of their star players, and that will be the same case against the Knicks as well. It will be 4 games missed for Kyrie and it is still not known whether he will surely be back after 1 more game or if he will remain suspended from the team.