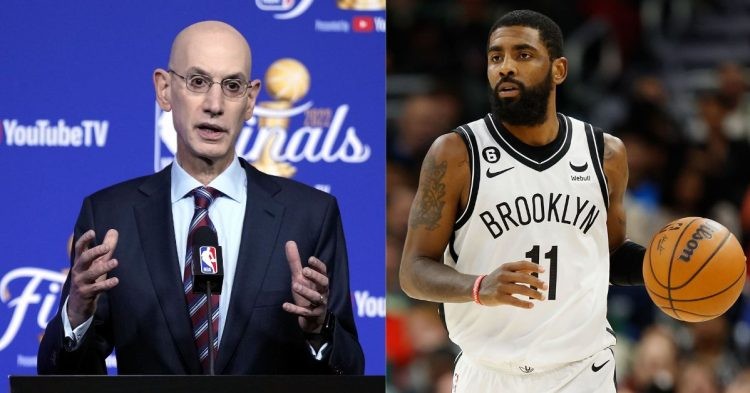 Kyrie Irving on the court and NBA commissioner Adam Silver in an interview (Credit: Twitter)

Despite sending out a delayed apology, Brooklyn Nets star Kyrie Irving has been suspended for his recent “anti-Semitic” behavior. It seems that he did not understand the severity of the situation or consequences before deciding to share a link to a controversial documentary.

This is a sensitive time and age. Hate speech and discrimination should not be tolerated regardless of the affected community. The Brooklyn Nets decided to suspend Kyrie under this premise. With that being said, we should wonder when we can expect Irving to return to play and under what conditions.

It seems that the league officials have decided to take this matter very seriously. News of his suspension was followed by an apology. However, the apology came too late and the decision to suspend him had already been made.

Quite some time has passed since Irving shared the video. The Nets have already played two games in that span. Thankfully, they were able to win both these matches and maintain a decent record. That means there are 3 games left in Kyrie’s suspension.

If we look at the Nets’ upcoming schedule, they will be facing the Dallas Mavericks, New York Knicks, and Los Angeles Clippers in their next 3 games. Kyrie is expected to miss all these games and will have to fulfill additional criteria to satisfy the Nets in this timeframe.

These criteria include; a condemnation of the movie, a donation of $500,000 to anti-hate causes, sensitivity training, and anti-Semitic training. Moreover, he will have to meet with Brooklyn Nets owner Joe Tsai and Jewish leaders to “understand”.

Sensitivity training and Anti-Semitic training are quite difficult challenges themselves. Additionally, meeting with Joe Tsai, who was one of the first people to condemn Kyrie’s actions on social media, will prove to be the toughest of them all. We hope Kyrie is able to push through it all and return to playing for the Nets.

Fortunately for NBA fans, if Irving does comply and follow what his organization deems necessary, he will be able to play in the game against LeBron James, Anthony Davis, Russell Westbrook, and the Los Angeles Lakers on the 13th of November. This will be an exciting matchup for us to watch.