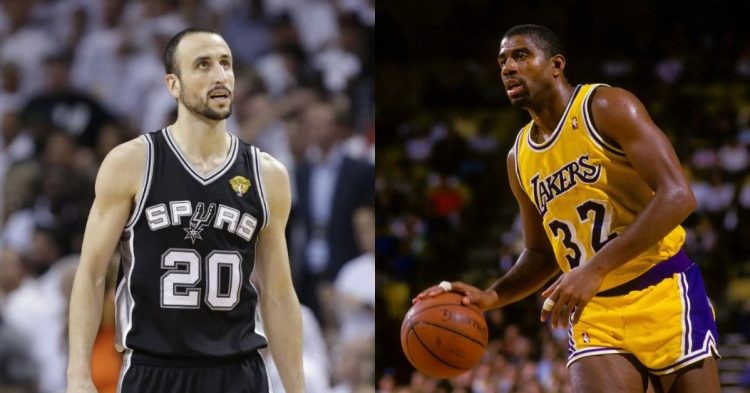 Magic Johnson is widely considered one of the greatest Lakers ever, if not the greatest. He helped Los Angeles become a dynasty and delivered 5 NBA titles there between 1980 and 1988. Additionally, he has remained closely associated with the franchise even after retiring as a player. Magic recently delivered some high praise for the San Antonio Spurs legend Manu Ginobili.

Veteran NBA fans will remember the clashes between the Spurs and Lakers. At a time both of them were considered championship-level powerhouses within the western conference. Manu, who has been a cornerstone of the Spurs’ success has been acknowledged for his accomplishments in the league. Therefore, Magic decided to send a tweet out to acknowledge a fellow former player.

We have already heard of the “Hall of Fame“. It would surprise many people to know that it is actually a museum called the Naismith Memorial Basketball Hall Of Fame. The HOF is located in Springfield, Massachusetts. It serves as basketball’s most complete library.

Being inducted into the Hall Of Fame is an honor that not many NBA players have. Manu is the latest recipient of that honor. Thus, Magic Johson decided to give him some lavish praise.

To one of the most unstoppable players to ever play in the NBA, Manu Ginóbili, congratulations on your induction into the Naismith Basketball HOF! @Hoophall @manuginobili

“To one of the most unstoppable players to ever play in the NBA, Manu Ginobili, congratulations on your induction into the Naismith Basketball Hall of Fame.”

Manu was certainly unstoppable in his own rights. He was definitely an integral part of the San Antonio Spurs dynasty this century. However, the Spurs star averaged only 13.3 points, 3.5 rebounds, and 3.8 assists. These are quite average numbers according in comparison to the numbers superstars have put up over the years.

However, Ginobili was considered unstoppable for a simple reason. He could do almost everything we could ask a player to do. Manu was a good shooter at both the midrange and from the three-point line. Additionally, he was an extremely creative and smart passer.

The reason his numbers look deflated is simply that he spent his career on a loaded roster. Therefore, he was known for his loyalty and self-sacrifice in order to make the team better. We are used to NBA stars who look to make themselves appear greater. However, Ginobili was the opposite and strived for team success first. He has been rewarded fittingly for his years of excellent play.