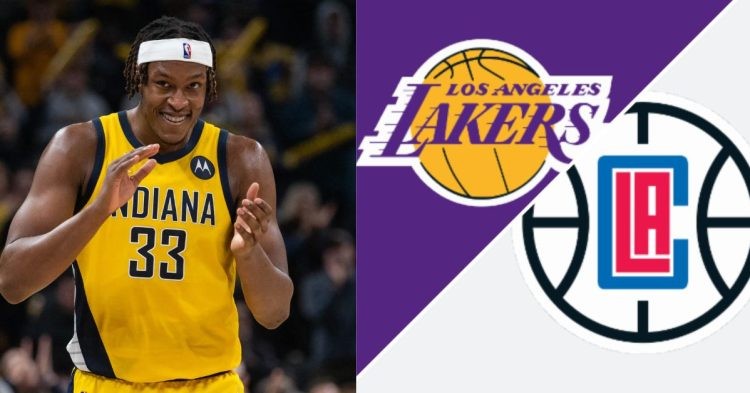 The Los Angeles Lakers are currently off to a bad start this NBA season. They hold a record of 3 wins and 10 losses, one of the worst in the league. Myles Turner is a solid NBA center currently with the Indiana Pacers. Several talk about him soon leaving the team and playing somewhere else.

LeBron James’ Lakers are certainly one of the teams in the bidding hunt for the Pacers star. However, it turns out that the Los Angeles Clippers are also in the race. We should wonder which of these teams is more likely to add Turner to their roster and how it will all work out.

Myles Turner has spent his career so far with the Indiana Pacers. He revealed that he was finally done playing for that city and would like to take his talents somewhere out west. He was clearly referring to the Los Angeles Lakers.

If the lakers sit on their hands and the clippers trade for Myles Turner I’m going to be livid.

Honestly want the Clippers to trade for Myles Turner just so I can see how Lakers Twitter reacts.

“Just playing in the bigger market, I just feel like here in the Midwest we don’t get the love that I think we deserve. It doesn’t get taken on the national level. You are under the microscope out there at the West, when you are doing bad you going to hear about it.”

Myles makes a valid point. After all, not many people watch Indiana Pacers games, nor are they nationally televised. Despite his interest to join the Lakers, they showed more interest in a trade involving his former teammate Buddy Hield.

There is no arguing that the Lakers could use what Myles brings to the table with a stable interior defense. He is averaging 17.9 points and 8.7 rebounds this season. This is something the Los Angeles Clippers seem to be interested in as well.

When The Clippers spot the Lakers trying to trade for Myles Turner pic.twitter.com/EPCwWjICMW

NBA fans have drawn conclusions that the Clippers are entering the discussion simply to thwart the Lakers’ plan, “The Clippers trading for Myles Turner while the Lakers literally NEED him would be the most LA thing ever and perfectly sums up the last 10 years of front office competence between the two franchises.”

In any case, Turner might just end up becoming a Los Angeles Laker or Clipper in the near future. However, it is also possible that the Pacers fight to keep him. We will have to wait and see to find out what happens.