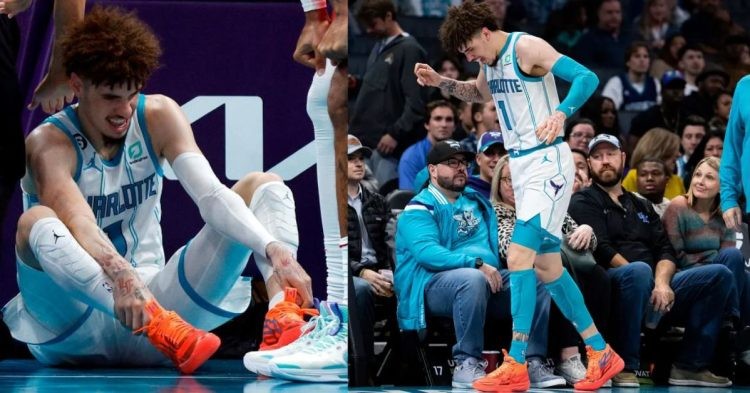 The youngest Ball brother LaMelo Ball has proven himself to be quite a remarkable talent so far in his young NBA career. As we all know LaMelo is currently with the Charlotte Hornets, a team that is owned by none other than the Chicago Bulls legend Michael Jordan. Despite showing flashes of greatness on numerous occasions, Ball has already been sidelined a few times in his career due to injuries.

NBA fans most certainly know how important health is for stars who make their living in the league. Without consistently having LaMelo on the court, his team has been struggling and holds one of the worst records in the Eastern Conference at 12 wins and 34 losses. That said, fans must certainly want to know what injury he just suffered and more about his return timetable.

How did LaMelo Ball get injured?

LaMelo Ball proved himself to be a solid player and a bright future for the NBA. However, the constant injuries that he has been going through have sidelined him from action on numerous occasions. Unfortunately, his prime might just be ruined if he continues being injured. Some of us already know that Ball broke his wrist and underwent intensive rehabilitation for it.

However, that could be called a one-time incident and nothing to fret over. His ankles are another case entirely. LaMelo has been injured multiple times on his ankles due to landing awkwardly or putting undue stress on them. As veteran NBA fans will remember, this is something that even Stephen Curry and Kyrie Irving faced multiple times in their career.


LaMelo Ball and the Charlotte Hornets were playing against the Houston Rockets, another team that is struggling to get wins this NBA season. During the early stages of the third quarter, Alphren Sengun rebounded the ball and fed it to Jabari Smith Jr. who got in the air to score a layup for the Houston Rockets.


As Jabari went up to make the shot, both LaMelo and PJ Washington jumped in the air to challenge it. While they failed to do so, PJ landed on LaMelo’s ankle within a second of Ball landing himself. As a result of this, LaMelo’s ankle twisted in a painful manner and he instantly went to the ground.

Ball was soon sidelined and did not play in the rest of this game. At the moment, it is still unclear when he will be able to make a return for his team. It is quite sad to see players getting injured in this accidental manner by their own teammates and we hope that LaMelo has a speedy recovery.