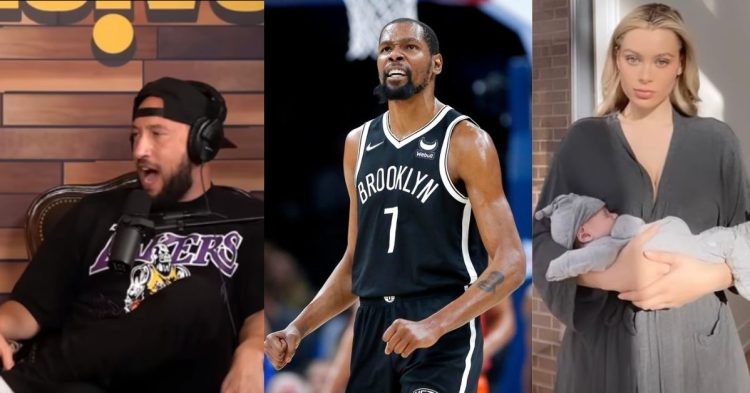 Rhoades is somewhat of a global figure in terms of popularity and impact. It would surprise a few people to know that Majlak believes an NBA star is the father of Lana’s child. We have no way of knowing the exact truth unless it is publicly revealed. After all, Majlak himself was in a relationship with Lana. Therefore, we should assume he has done his due diligence and is not speaking for the sake of controversy.

There is no arguing that Kevin Durant is one of the most prominent players in the NBA who is still single. There have been several rumors that he was dating Lana Rhoades a while ago. Thus, it isn’t too shocking that he is the prime suspect when it comes to who the father of Milo Rhoades is.

Mike Majlak revealed it to be KD when on air with Logan Paul. However, he censored the name in order to prevent slander charges and controversies of any kind. He was initially asked why his relationship with Rhoades failed.

“Uhm just because it was… It got a little toxic and cause I think It was timing-wise I was in my 36 she was still in her mid-20s so it was an age thing but she’s doing well she got a kid now with that big-time NBA player.”

When asked whom it was, he revealed a name. The censor bleep was quite fast and that allows us to conclude the only name that could fit within that window was “KD“.

If Kevin Durant is indeed Milo’s father, we are sure he would like to be there for his son. After all, KD’s father was never a part of his life and his mother raised him single-handedly. Thus we can be quite certain that he takes care of his child. If it is his indeed.