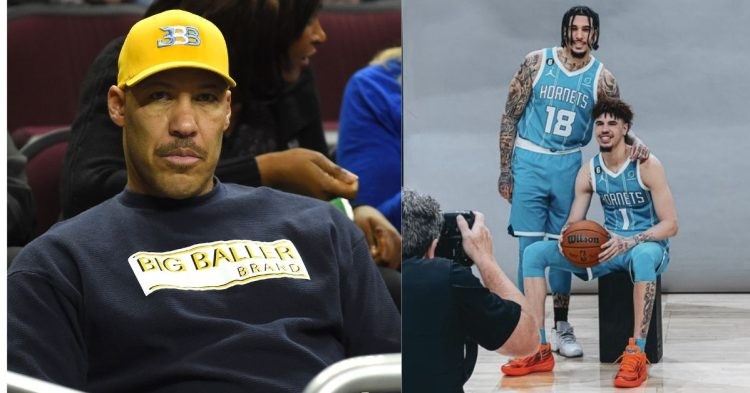 LaVar Ball is the father to Lonzo, LaMelo, and LiAngelo Ball. His supporting and hyping up his children alone made him quit the prominent personality in the basketball world. He has also managed to become a successful businessman and is the creator of the Big Baller Brand. Lavar has even claimed to be a better player than Michael Jordan in one of his rants.

His middle son LiAngelo is the only brother who is not an NBA player. Some of us were pleasantly surprised to hear he was given a chance with Michael Jordan’s Charlotte Hornets. That would mean LiAngelo would have the opportunity to play with his younger brother on the same team.

However, it seems the Charlotte Hornets are not sold on him. They have decided to waive LiAngelo from the roster even before the NBA season has begun. One must wonder what he could have done wrong and why the Hornets decided he wasn’t worth the hype.

Lavar has claimed that a team with all three brothers on it would be unstoppable. However, it seems the dream ended even before the two of them got to play together.

LiAngelo could not have gotten off to a worse start with the Hornets. Unfortunately, we can’t even categorize this as the nerves of being a rookie. He has played overseas and in the NBA G league. Therefore, there were certain expectations placed on his shoulders. Additionally, he is still a Ball brother and that brought hype to him.

LiAngelo Ball has now been cut from the Charlotte Hornets‼️😳 pic.twitter.com/tY5Av4cEWY

The team lost every single game they played in the preseason. They first lost to the Celtics 93-134. LaMelo Ball scored 14 points, 7 rebounds, and 4 assists playing 25 minutes of the game. On the other hand, LiAngelo played for only 4 minutes. He recorded only a single rebound and nothing else in that game.

The next matchup against the Pacers was a similar story. LaMelo scored 12 points 7 assists and 5 rebounds in the loss. LiAngelo added a single point and assist in this attempt. Things were just not looking good for the team.

LiAngelo did not play in the next game, which was a rematch with the Celtics. He finally suited up for the match against the Washington Wizards. There he scored two points in 4 minutes of action. He has not played for the team since then and it looks like his time in the league is done. LaVar did well as a father in a manner of speaking, he raised two NBA-level sons. However, he got it wrong when he claimed that they would all play together.
Tags: Charlotte HornetsLaVar BallLiAngelo BallNBA
Previous Post