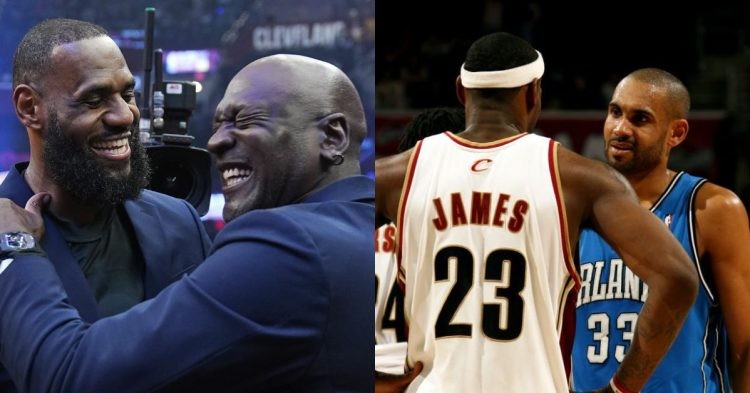 The LeBron James and Michael Jordan debate can go on forever and you might never find an answer. You will just have 2 sides completely annoyed and waiting to end the conversation. Both players have had their share of hate but Grant Hill says that LeBron has had to deal with more.

Grant Hill was once a player that could have been the next ‘G.O.A.T.’. He was drafted at the age of 22 under the label of ‘Next Michael Jordan’. Injuries massively derailed his 18-year career. Grant Hill fell under his potential and was still a Hall of Famer.

To imagine what his career would have been like is the greatest ‘what if’ question of all time. There aren’t many players in the league who have a better rapport than him to talk about LeBron and Jordan.

Does LeBron James get more hate than Michael Jordan?

Grant Hill was a guest on JJ Reddick’s podcast, ‘the Old Man and the Three’. Their conversation had a lot of points that we could dwell on. But his take on Lebron James was the one that grabbed all the headlines.

“We don’t, those old heads who love Jordan, I don’t think we fully appreciate what LeBron has done…No player has ever endured, in my opinion..as much vitriol, abuse, and slander that LeBron James has endured.”

“No player has ever endured, in my opinion..as much vitriol, abuse and slander that LeBron James has endured.”

LeBron James was voted year after year as the most hated player in the NBA. Even though he’s in the conversation of becoming the ‘G.O.A.T.’. It showcases that the better the player you are, the more hate you get. But the hate would be slightly less if former players did not pile up with their hateful opinion.

Rasheed Wallace, Michael Jordan, and many others have been driving the hate to new levels. They’ve called him soft and put forth the hypothesis that he would not survive in any other era. However, the same thing has happened to that player by players even before them.

Wilt Chamberlain passed away with the belief that he was levels above Michael Jordan. Kareem Abdul-Jabbar, David Robinson, and Hakeem Olajuwon never gave in to Shaq’s greatness. Shaq, MJ, and all players hated that but that never stopped them from doing it to their successors. The lack of empathy is not something that has entered the modern age of basketball.

Change can be hard to accept but for the first time, it’s for the good.