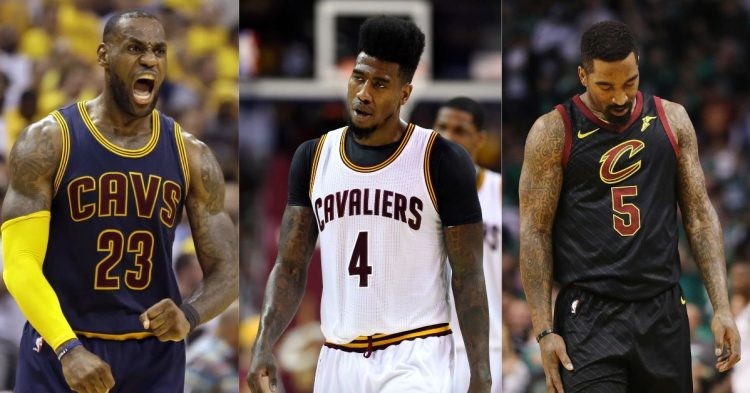 Many new NBA fans are unaware of the years of dominance and excellence displayed by LeBron James during his time with the Cleveland Cavaliers. The King carried the Cavs to the NBA Finals 4 times from 2015-2018. He had several role players including Iman Shumpert and JR Smith for several of these NBA finals runs.

King James drew attention to these former players recently in a response to a Twitter post. He spoke glowingly of Shumpert and Smith. However, LeBron discussed how both these stars proved everyone wrong after the trade for them went through. It is important to understand the full context of what was said.

Other than Kyrie Irving, LeBron has struggled to play with or recruit another real superstar talent during his time in Cleveland. It speaks to his greatness that he carried his team even without Kyrie to the NBA Finals in 2018. Both Iman Shumpert and JR Smith were traded to the Cavs in 2015.

At the time several NBA analysts considered their value quite low and criticized the move to acquire them. However, this proved to be completely false as they were able to help King James make the finals for 4 years in a row.

never forget how people laughed at the JR Smith & Shump deal. Swish was written off before he came to the Cavs. Situation, fit and accountability around you matters.

A Twitter account, “73-9 and THEY LIED” shared an interesting post complimenting both James’ former teammates. “Never forget how people laughed at the JR Smith and Shump deal. Swish was written off before he came to the Cavs. Situation, fit, and accountability around you matters.”

Swish refers to JR Smith who had quite a career himself. Smith was quite the star with the Denver Nuggets and New York Knicks during his prime. He was included with Shumpert in a three-team deal sending both of them to the Cavs.

LeBron responded to the tweet in agreement, “FACTS!! I was so damn EXCITED & HAPPY to get them both!! And Swish was a throw in the deal! That’s what was funny to me.”

This is the ability of great players. A prime LeBron James was able to carry a team with washed players and veterans repeatedly to the NBA Finals. JR and Iman are both NBA champions thanks to King James and he certainly thinks they deserve it.