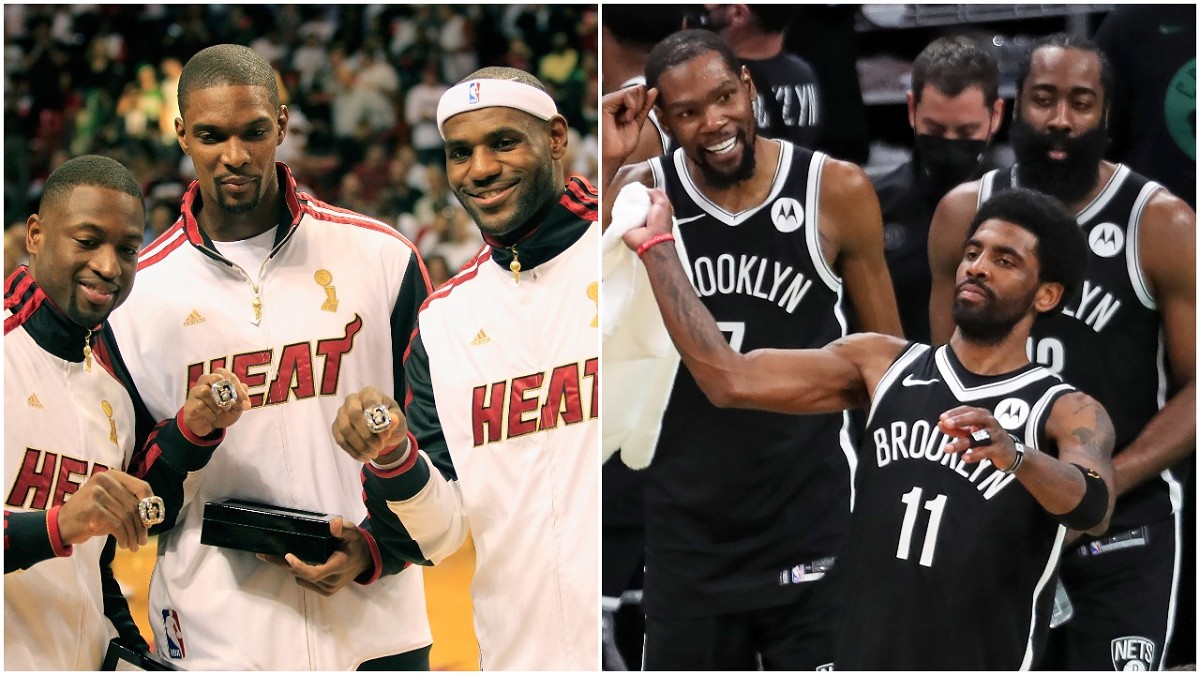 Watching Kevin Durant and Kyrie Irving go off against NBA teams inevitably serves as a reminder of all the great duos that played together. The Nets duo have not found championship success yet but on the court, they have worked in perfect tandem. And you don’t have to go too far back before you come across LeBron James and Dwayne Wade at the Miami Heat.

LeBron and Wade played for 4 years together in Miami, as part of the Big Three along with Chris Bosh. They played 285 games together and saw each other’s best years while dominating the Eastern Conference. The duo played 86 playoff games together en route to their championship success.

They won their first NBA Championship together against the Oklahoma City Thunder in 2012. And they did so in a dominant fashion, winning the series 4-1. James and D-Wade averaged over 53 points combined per game in their playoff run. Likewise, the first championship was followed up by another the next year.

They won a hard-fought series against the San Antonio Spurs in the NBA Finals in 2013. This time the two combined for over 41 points a game, with LeBron taking Finals MVP home in both finals. The partnership disbanded the next year after the Spurs team took their revenge.

But it will always be remembered as an immensely successful partnership that went to 4 NBA Finals in 4 years.

While Kyrie and KD have not reached the same level of success yet, theirs is just as lethal a partnership. The duo has only played 44 games in their career together and the signs are good. It is not difficult to predict that their partnership will bear success in the form of at least one championship.

Former Houston Rockets All-Star, Tracy McGrady, had an interesting take on the abilities of the quartet of players. Speaking on Club Shay Shay, the podcast with TV host Shannon Sharpe, McGrady commented on the level of the Brooklyn Nets duo.

“LeBron and D-Wade, skill-wise, are not touching KD and Kyrie.” pic.twitter.com/vgqzWBa2VL

He was asked by Sharpe, “KD and Kyrie, are they the most skilled pair of teammates that we’ve ever seen?”. T-Mac responded promptly, “Without a doubt, without a shadow of a doubt. I haven’t seen a duo that skilled.”

He went on to further praise them, “There’s no other dynamic duo that compares to KD and Kyrie.” Drawing comparisons with the former Heat duo, McGrady said, “LeBron and D-Wade, skill-wise, they still not touching them two boys.”

Such high praise from an accomplished player such as Tracy McGrady is not new for the pair. And they will allow it to fuel them in their first-round battle against the Celtics and Jayson Tatum.