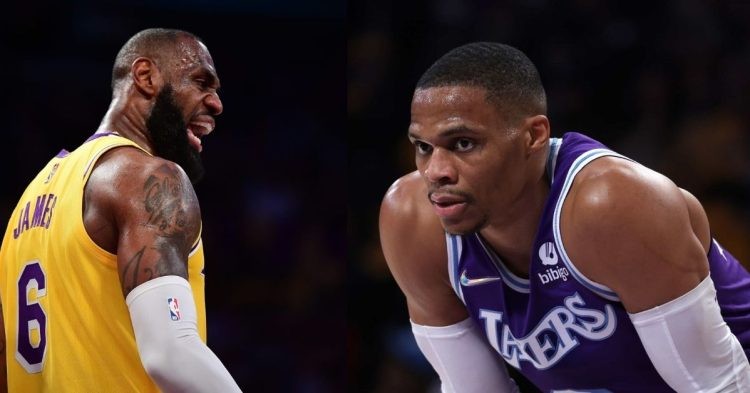 The LA Lakers have endured a long and hard season this year. They missed the playoffs for the second time in a row. The LA team brought in LeBron James & Anthony Davis to help them become a powerhouse again. That dream came true in 2020 as LeBron & AD guided them to the title. However, things have been going downhill since then.

The LA Lakers hired Darvin Ham last month to replace Frank Vogel, to rebuild the team from scratch. Ham was a member of the Milwaukee Bucks coaching team that won the championship.

If things weren’t bad already, reports have emerged saying there is a rift in the locker room between the Lakers players. More importantly, between LeBron James and Russell Westbrook.

The Lakers and the Phoenix Suns played in a Summer League game last night. The league’s purpose is to help teams identify the best talents and how they can structure their roster for the upcoming season. However, all eyes were on two particular members of attendance.

LeBron James and Russell Westbrook sitting as far away from each other as possible during the Lakers Summer League game … xoxo, gossip girl pic.twitter.com/Tut4nqFWOK

LeBron James and Russell Westbrook attended the game last night, which surprised many. Not many NBA professionals attend the Summer League. What made things interesting was the fact that the pair did not sit next to each other, let alone speak. The incident has sparked rumors of a rift between the two Lakers stars.

If there is a division within the Lakers players, that will fuel the trade rumors of Westbrook as well. Reports say that the Lakers are planning to include Russ in a deal that will help them land Kyrie Irving. The Brooklyn Nets star was also spotted in LA at a Sparks game recently. The rumors may have been the factor that divided the two stars as LeBron may be looking to be reunited with Kyrie since the chemistry with Russ doesn’t seem to be working.

With the LA Lakers looking to rebuild their roster, it seems like the trade rumor fest is at its peak. Almost every trade rumor that travels in the league will somehow contain their name. It seems like that’s what you get when you’re one of the best teams in the history of the NBA.