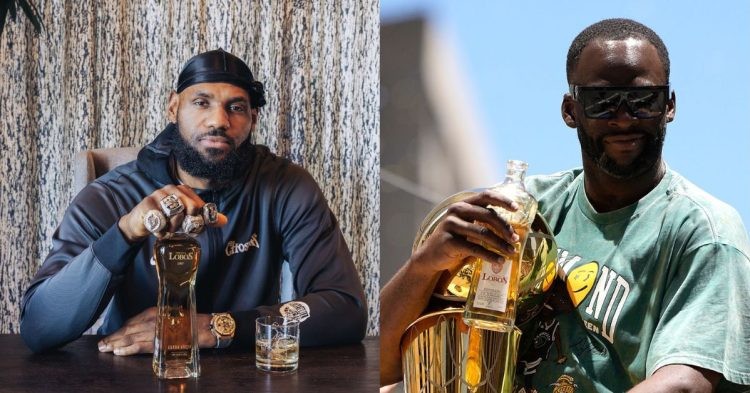 NBA players have got in the business industry and have managed to expand their expertise. They have invested in restaurants, sports teams, drink brands, and much more. There are a few players that have taken the alcohol industry by storm after investing in a brand.

A couple of years ago, LeBron James, Draymond Green, and Anthony Davis all decided to invest in tequila brand Lobos 1707. The brand is named after the Spanish word for “wolves”. Ever since the players have chosen to join the brand’s journey to the top, it really has been like that.

LeBron and Draymond are often seen promoting the brand online and on other platforms as well. The pair were in an advertisement together on Lobos’ Instagram page.

One time that they advertised the tequila publicly was when LeBron poured a toast for Fathers from a Lobos tequila bottle. Adding on, DG was also seen on TV celebrating with a Lobos bottle. The celebration was during the Golden State Warriors trophy parade after their 2022 NBA title victory.

“We drinking Lobos and we telling y’all to shut up.”

Draymond Green is on 10 at the Warriors championship parade 😂 pic.twitter.com/kw2bJBHIT4

DG in classic DG fashion even said, “We drinking Lobos and we telling y’all to shut up”. That wasn’t the only thing he did that day that caught attention. He also had a message for haters and critics of GSW. The brand has the backing of absolute superstars, but what we can wonder about made them invest in the brand.

What convinced the NBA legends to invest in Lobos 1707 and how could they help the brand?

We know that LeBron invested in Lobos before AD and DG. Dia Simms, the CEO, even launched the brand with LeBron as the leading ambassador. The Lakers player later revealed what got him to invest in the brand. He said, “I knew the first time I tasted Lobos 1707 Tequila that it was special, when I learned more about the brand story and leadership team, I knew I wanted to be a part of it.”

“Lobos 1707 is about celebrating the strength of the group and bringing people together. It’s about shared passion and values. I love sipping Tequila with my friends, and we want a brand that speaks to us” LeBron added. It seems like the investment in the alcohol venture is more than just a business move, but also something personal for LeBron.

The 37-year-old’s business decision prompted Draymond Green and Anthony Davis to get on the train. We all could see that the brand was growing quickly with the help of the GOAT. Moreover, there is no way that Green and Davis would have wanted to miss the opportunity of being part of something so meaningful. Adding on, the company could use the popularity of the NBA players as well.

Although it hasn’t been long since the company launched, they have managed to take huge steps with the help of LeBron, Draymond, and Anthony. It seems like the players have made a good investment and helped the brand grow with their popularity and capital.