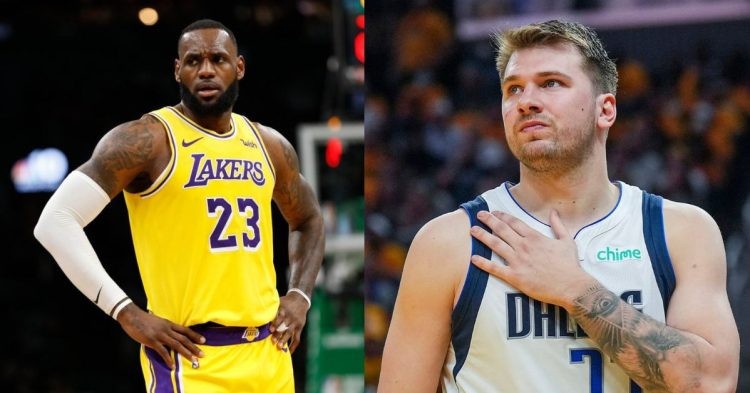 LeBron James has been on the main stage for almost two decades and he knows greatness when he sees it. He has gone out of his way to praise many players in the past, but no one knew who was on his mind for his favorite. It was the one and only Luka Doncic who caught the GOAT’s eye in the entire league. The Dallas Mavericks star broke out onto the scene and immediately caught the eye of many with his abilities.

Doncic justifies LeBron’s admiration for him after the tremendously successful season he just had. The Slovenian averaged 28.4 points, together with 9.1 rebounds and 8.7 assists. He had managed to help his team to reach the Western Conference Finals in 2022 after a 3-year wait.

The Mavericks had a decent season before falling apart against the Golden State Warriors. Despite the 10-point defeat, Doncic put up a solid performance to take the fight close. He made 28 points, 9 rebounds, and 6 assists.

The face of the LA Lakers was asked to comment on why Luka is special on the latest episode of The Shop. He answered with Luka’s size being the main factor. Despite being 6’8 and 225 pounds, the 23-year-old’s speed is something to take note of, which LeBron also mentioned. Doncic is always one of the fastest players on the court, which acts as an advantage to him when defending.

James also went on to mention what makes the Mavs guard different, “It’s the mind”. The 37-year-old has all the experience in the world to know what the El Matador is doing right.

He claims that Luka has his eyes on his opponents to watch their every move. It is believed by LeBron that the young star would have his markers beaten with a simple Euro step, together with aid from his body movements to deceive them.

Luka Doncic’s age is something that truly surprises people. It is hard to believe the progress he has made at just 23. Many believe that he can become even better and put up greater numbers. However, it is not every day that you receive praise from an all-time great. LeBron’s comments speak for Luka’s talent and what has achieved so far in the league, even if he goes on to achieve bigger things.