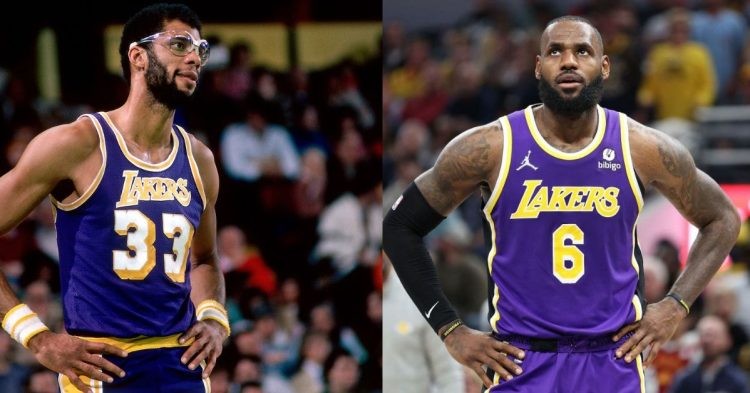 LeBron James is an NBA legend and is widely considered by many to be the GOAT. Other NBA legends who can make the same case are Michael Jordan and Kareem Abdul Jabbar. These three NBA greats are widely considered the best 3 players the game has ever seen.

We already know Jordan has 6 rings to LeBron’s 4. Additionally, it would interest many people to know that Kareem is also a 6x NBA champion, just like MJ. It is now becoming common knowledge that King James is looking to surpass Kareem as the league’s all-time leading scorer.

This could potentially be a great accomplishment that catapults LeBron’s GOAT case even further. He was recently asked how he feels and what kind of connection he has with Kareem Abdul Jabbar. However, King James did not mince his words or fake emotions when put on the spot.

LeBron James reveals he has no relationship with Kareem Abdul Jabbar

We always assume that current and former players in the league are on good terms and have only positive things to say about the others. Of course, there are rivalries that dismiss the need to compliment others. Nonetheless, giving a league legend their props and credit is quite an important aspect of the NBA.

Kareem’s all-time scoring record was one of the things we never thought we would see someone else break. However, according to the calculations, King James is set to surpass Kareem this season if he averages anything around 25 points per game.

Since we already know LeBron averaged 30 points last season, this is something that can easily be done. The 4x NBA champion was recently asked about his relationship with Kareem and how he feels now that he is close to surpassing Jabbar’s seemingly untouchable record. However, LeBron gave quite the blunt and real answer.

“No thoughts and no relationship.”

Perhaps we should blame the media member for asking the question ” Do you have any thoughts on Kareem? and also if you have a relationship with him?“. LeBron could have chosen to say something nice and give the NBA legend his props. Be that as it may, he chose to answer the question truthfully and at face value. We should wonder how Kareem absorbed this potential insult and whether we can expect a response soon.