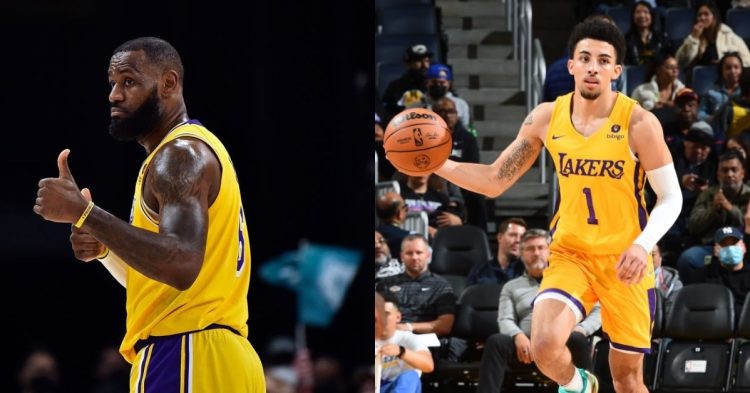 It is the NBA offseason and summer league basketball is an opportunity for teams to find new players. LeBron James has always been a part of his organization’s business moves and roster decisions throughout his career. In most cases, the King seems to be aware of what he needs around him and the types of players he likes playing with and sent out a tweet complimenting one of the Lakers’ latest additions Scottie Pippen Jr.

It is important to know that the Summer league was for only 3 days between the 2nd and 17th of July. That means most players do not have much time and opportunity to display their skills for the world to see. Scottie Pippen Jr’s father is well known for his championship runs with Michael Jordan and the Chicago Bulls. One must wonder whether LeBron sees similar potential from Scottie Jr.

Scottie Pippen Jr made his summer league debut along with Shareef O’Neal. It is interesting that both their parents are NBA champions and legends in their own rights. However, even if the father is a star, this does not guarantee the success of his child in the same field. This is because a mixture of talent, hard work, and potential along with several other personality traits are required.

The kid has a bright future!! 💜💛 https://t.co/YobiiXICsH

King James already believes Pippen Jr has what it takes to have a bright future. King James saw that the young man already has a polished and well-developed playstyle despite some flaws. Pippen Jr is listed at 6’3 and weighs 180 lbs. Additionally, he is only 21 years old and has much room to improve. It is unfair to already analyze and categorize his playstyle after having seen very little. However, it is possible to observe his strengths and weaknesses to some extent.

Scottie Pippen Jr is perhaps the best player on the Lakers’ summer league team. He outshone Shareef O’Neal and the other young teammates and is on a mission to prove he can go toe to toe with the best in the world. His most revealed and criticized weakness are his turnovers. He averaged almost 3 turnovers in 20 minutes of playing time. Thus, this spells disaster at an NBA level where these mistakes are punished by the opposition.

Scottie’s most noteworthy strength is using his basketball IQ on defense and stealing the ball for his team. There are at least 3 games where he had 3 steals in around 20 minutes of game time. It is interesting to note that both turnovers and steals are indicators of different types of basketball IQ. One is careless offense, the other is reactive defense. King James, who has a high ball IQ of his own knows this better than anyone and chose to appreciate the young athlete.