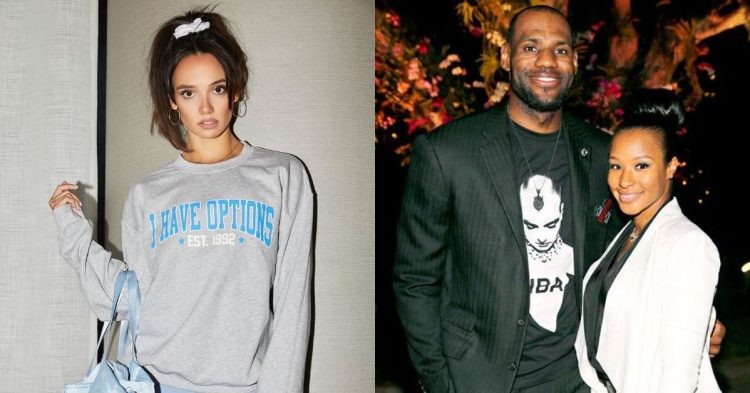 In the NBA, we have seen many players be unfaithful to their wives and girlfriends. It has been something that has become quite common as years passed. Similarly, LeBron James has been accused of the same by a popular social media personality.

In Italy it’s considered rude to not match your outfit to the restaurant furniture 🍊🇮🇹 pic.twitter.com/rM7p80QOii

It is none other than Sofia Franklyn, who is known for her podcasts. She hosts the “Sofia with an F” podcast and discusses mental health, her personal life, and many more aspects of her life. Recently, she caught the entire world off guard by spilling some shocking details about the one and only LeBron.

LeBron James has been married to Savannah James since 2013

On her podcast, Sofia was discussing how Hollywood A-lister Leonardo DiCaprio wanted women to sign Non-Disclosure Agreements before spending time with them. She said, “Leonardo DiCaprio, I know for a fact, I mean, I’ve never been invited but my friends have. He goes out, and his bodyguards or whatever go up to the girls, ask them if they want to go back to his house or wherever. They sign an NDA.”

About King James, Franklyn claimed, “LeBron James, same sh*t. Should I be outing all these people? … LeBron James has various parties constantly where NDAs need to be signed and women are at. You didn’t know that? You didn’t know LeBron is a cheater.”

Sofia’s revelations have shocked the NBA community as a whole. The reason for that would be because of how it saw the LA Lakers star as a family man. James has been married to his wife Savannah since 2013. If Sofia’s allegations are true, it will affect his marriage life with his wife.

Although there has been no comment from James, his fans have taken to Twitter to call out Franklyn for lying about the NBA player. A user said, “Sofia franklyn is on tik tok making false claims of u cheating on ur beautiful marriage wife she just sayin stuff for clout about u bro.”

LeBron has built an empire off the court, with the help of Savannah and their three kids. Although many claim that Franklyn is making false claims to gain popularity, the allegations appearing online will damage James’ reputation as well. It is still unknown whether he will be making a comment on the matter in the future.