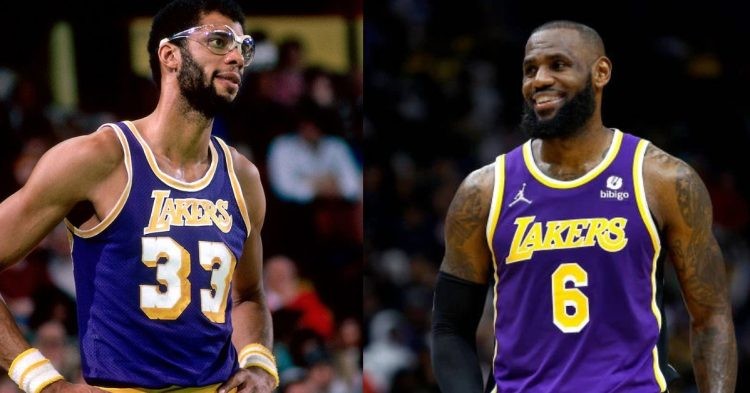 LeBron James is entering Year 20 in the NBA with the Los Angeles Lakers. He has shown incredible durability and longevity through the highest level of play for years. Thus, he is now on pace to be the leading scorer in NBA history. King James was not considered a pure scorer like Michael Jordan. Be that as it may, he is about to surpass Kareem Abdul Jabbar to become the NBA’s leading scorer.

The 4x NBA champion was recently asked to name his top 5 greatest Los Angeles Lakers players of all time. It would interest many people to know that he excluded Kareem from this list. This begs the question as to who the 5 players he chose are and whether they are actually better than Kareem Abdul Jabbar.

Every NBA great is allowed to believe they are the best player ever or the GOAT. After all, basketball is a fluid sport and it is possible to dominate and compete from various positions. The Los Angeles Lakers and Boston Celtics are considered basketball royalty. They are two of the greatest franchises in the history of the league and have produced the most amount of superstar talent over the years.

Thus, there were actually a lot of options for King James to choose from when it came to the Lakers. Moreover, he announced his top 5 Lakers in terms of positions such as point guard and center. Therefore, it is inevitable that someone is left out. In this case, LeBron seems inclined to prefer Shaq “at the 5″ over Kareem.

It is quite difficult to compare Shaquille O’Neal and Kareem. They might have played the same position. But had very different builds and playstyles. LeBron knew Kareem had just as much contention for a starting 5 spot in his head. Be that as it may, he held strong to his belief that Shaq deserves it more.

“I mean Shaq was so dominant man, I mean I love Kareem too. I can’t even front on that, but Shaq’s so dominant. We need a big cause I’m playing the 4, so we need a big.”

We should not judge LeBron too much for his choices. Some of us could believe Shaq is better while others would believe Jabbar has a better claim. In any case, we now know LeBron James’ all-time starting 5 for the Los Angeles Lakers.