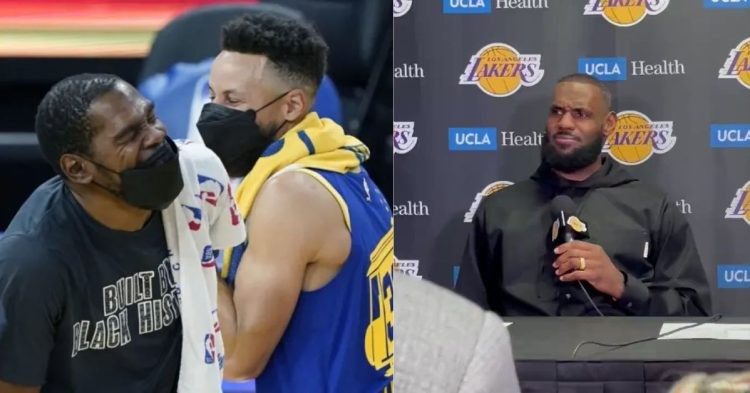 Lakers superstar LeBron James has been caught on camera lying far too many times. As a result, NBA fans have made them viral and rampant on social media like Twitter. We already know that the King has shown tendencies to speak before getting his facts right or claiming to have known things before they actually occurred. He has even potentially pretended to be a fan of a singer who recently passed away.

These memes are growing at an alarming rate. After all, they can be used almost anytime deceit or predictions are involved. They have even branched out of the NBA and into other parts of the sports world. With that being said let us take a look at them to understand what the fuss is all about.

Most of us are already familiar that NBA fans insert “Le” whenever describing something related to LeBron James. “LeDad“, “LeGoat” and many others were already popular. However, this new wave of memes has given birth to one of the most popular ones, “LeLiar“.

“You know I told Ted Cruz not to pull up to the parade.. I just had a gut feeling” -Lebron James pic.twitter.com/W9j2AY3ToA

“I told JFK that the drop top wasn’t a good idea the day before” – LeBron James. pic.twitter.com/3PtslVPRIj

It is certainly not LeBron’s fault and perhaps it is unfair to conclude that he definitely lied in all of the situations he was put in. However, there is also the fact that he has made statements and has not responded effectively when asked about follow-ups. Some of the situations fans hypothetically meme that only LeBron is capable off are hilarious.

“I was actually in the place where they took the picture and I said, guys I don’t have a good feeling about this. But they didn’t listen.”

“I remember the morning the Titanic departed from England, I was supposed to be on that ship. They called it unsinkable but I had a bad feeling.”

“I remember the morning the Titanic departed from England, I was supposed to be on that ship. They called it unsinkable but I had a bad feeling” pic.twitter.com/muMIqpfQY1

Fans also made direct amusing comparisons to the NBA, “I was actually FaceTiming KD before Game 7. I told him ‘Ain’t those shoes a size too big?’ He told me not to worry about it. I had a really bad feeling that night.”

“I was actually FaceTiming KD before Game 7. I told him ‘Ain’t those shoes a size too big?’ He told me not to worry about it. I had a really bad feeling that night.” pic.twitter.com/kIZw2gj4Yg

This is actually quite embarrassing for the King, who is a man caring deeply about his legacy and reputation. One must wonder if his public relations management didn’t train him well enough for the real-life situations he did face. However, it is also completely possible that he walked into many of these situations himself and showed his hand by oversharing inefficiently.