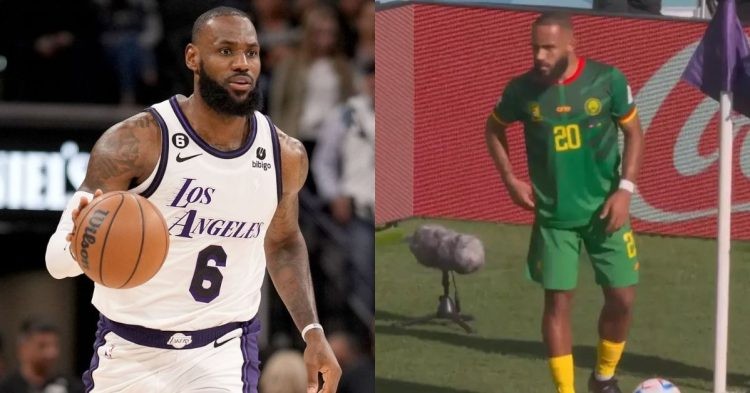 LeBron James is undoubtedly the talk of the town wherever he goes. He attracts large numbers of fans no matter what sport he is in. He could be at a soccer game, rooting for his favorite team, and the game could be an eventful one. But the truth is that eyes will be on King James even then. However, that has been the case in recent times as well, even when it’s not the man himself.

Recently, fans spotted a LeBron James lookalike at the most unexpected place. It was at the 2022 FIFA World Cup tournament. Who was the player that attracted thousands of reactions from fans?

Cameras spotted “LeBron” when he was playing against Switzerland at the World Cup a few days ago. The true story is that the player was actually Bryant Mbeumo, who plays for Cameroon on the international stage. However, fans still decided to have a bit of fun online even though that wasn’t the real King James.

One tweeted, “So this why LeBron been out the last 5 games.” This wasn’t indicated by the fact that the LA Lakers missed numerous games in recent times. This has been mainly due to his adductor injury, which kept him out for a few games.

so this why LeBron been out the last 5 games pic.twitter.com/WZaVWMgqOz

Nah the similarity is actually insane

He wouldn’t make it in soccer. It’s a team sport.

A fan has also taken a shot at LeBron‘s playstyle, by indicating that he wouldn’t make it as a soccer player. For context, many have had a go at the 4x NBA champion by calling him selfish and that he only cares about himself. It seems like the fan believes that he would never make it in the sport of soccer, mainly because of these attributes.

Yeah so actually I was playing in the World Cup pic.twitter.com/9ZzrlROvrJ

Another ran it back to the time when the “LeLiar” memes caused the internet to go into a frenzy. The fan wrote, “Yeah so actually I was playing in the World Cup” with the image of LeBron caught out for allegedly lying by the fans.

What was interesting and hilarious was that The King responded to the memes of the lookalike as well. He said on his Instagram story, “I mean I got work to do in other places too!” It seems like LeBron took it as fun as it was intended to be. The 18x NBA All-Star just returned to the court after recovering from an injury and will aim to help the Lakers continue their winning form.