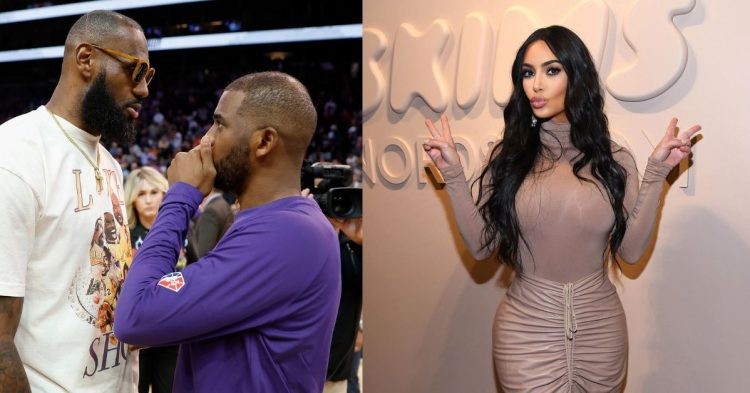 LeBron James‘ latest infamous meme has found its way into the Chris Paul- Kim Kardashian controversy. Some NBA fans might already be aware that Kanye West sent out a tweet accusing the Phoneix Suns star of having an extramarital affair with his ex-wife.

This is quite a controversial accusation considering that Kim’s divorce proceedings have just been finalized and Chris Paul was reported to be happily married. Considering these factors, it was almost impossible for anyone to predict that they would get together. Anyone accept LeBron James that is.

“I knew Chris Paul was hitting Kim Kardashian from day 1. I told him don’t let Ye find out but look where we are now ” pic.twitter.com/3Lm877HbUZ

With that being said, let us take a look at the latest memes made by fans. Additionally, knowing the context for all of this is also important.

Chris Paul had an affair with Kim Kardashian?

This seems to be the question on everyone’s minds. Some defend him and claim that Kanye is trying to spite Kim and potentially destroy a happy marriage. That would certainly make sense. After all, West recently found out that he has to pay $200,000 per month to Kim Kardashian as child support. Therefore, this was the perfect time for him to unleash and make a controversial accusation.

I actually sent Chris Paul this tweet in 2012 and told him i know messing with the kardashions will catch up pic.twitter.com/FmGw5DF3Yd

I remember telling my friends about this tweet in 2012 and how I knew CP3 bagged Kim K pic.twitter.com/wpsc3Gr7jh

We think fans should be free to decide for themselves about the truth behind these claims. Considering that Devin Booker who plays alongside CP3 is dating Kim’s younger sister Kendall, it is certainly not completely out of the realm of possibility.

Be that as it may, it is fair to say that absolutely nobody saw this coming. Social media began flooding with the infamous LeLiar Memes soon after this news broke out. To those who do not know, these memes started growing after fans found out LeBron James has a tendency to lie or exaggerate. His act of appearing all-knowing has turned into a meme that can be used in almost any situation.

“I saw Chris Paul go up 3-2 on the Warriors in the 2018 WCF and lose. That’s when I turned to Bronny and said ‘CP3 is just distracted. He’s banging Kim Kardashian'” pic.twitter.com/oTohlRiZ72

At least this puts a slightly humorous twist to something that is quite damaging and troubling to many people. We should also take a look at Chris Paul’s marriage to understand the likelihood of an affair.

Chris Paul is married to Jada for more than a decade

Fans of the Point God will already know that he has been married for more than a decade now. Chris and Jada tied the knot in September 2011 and were considered a steadfast couple in the NBA. One that could be compared to LeBron James’ and Stephen Curry’s marriages.

Paul and Jada are more than just a normal couple. They are business partners and owners of the CP3 Foundation, an organization helping underprivileged families. In fact, they even have two children together, a boy and a girl. This just makes Kanye’s accusations all the more troubling and impactful.

Sometimes silence is the worst response that one can deliver. There has been no official statement from Chris Paul’s side denying or agreeing to these scandalous accusations. That certainly creates the likelihood that West was not lying and that this did happen.