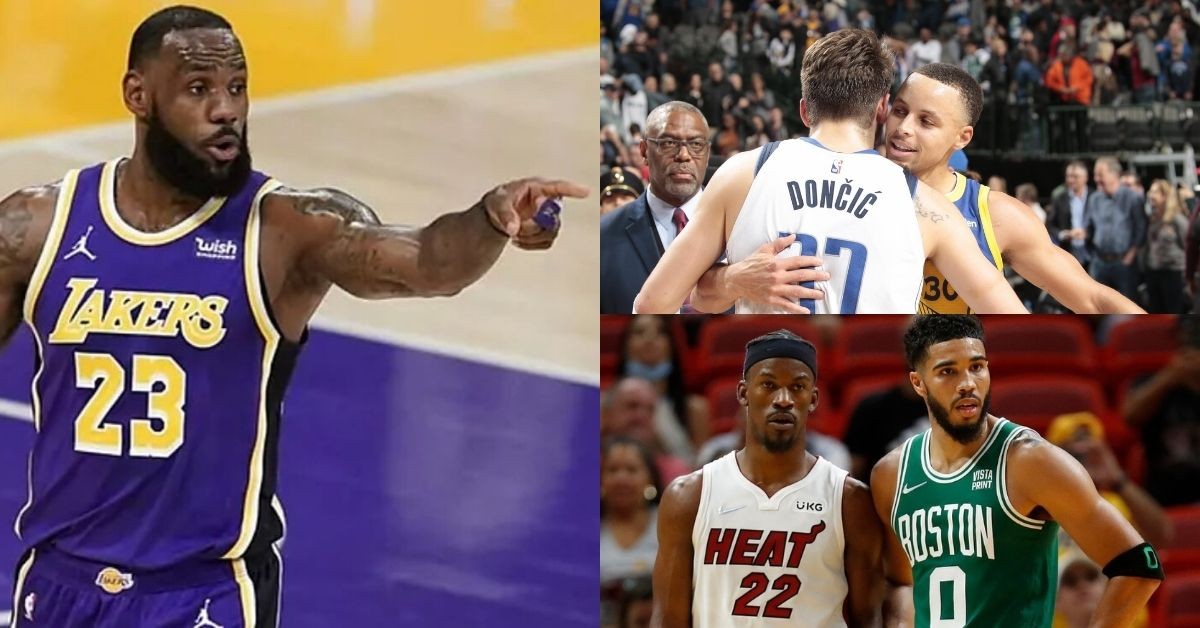 The Los Angeles Lakers ended their season early without making the playoffs. LeBron James and his multiple 50-point performances could not get them over the line. And a dysfunctional team in its first year together undid all the championship expectations levied on them before the season began.

In the Lakers’ absence, the playoffs have continued in full stead. The playoffs haven’t missed a beat and look as promising as ever with a new champion set to be crowned after both finalists were eliminated.

The Dallas Mavericks upset the Phoenix Suns in spectacular fashion in a historic Game 7. Likewise, the Boston Celtics bested the Milwaukee Bucks and thwarted Giannis Antetokounmpo’s best efforts to stay in contention. The remaining 4 teams are the cream of the crop from this season’s NBA and they have the players to back their contention.

LeBron James might have exited the season early, but he has stayed on in spirit. James has followed the playoffs closely, as evidenced by his tweets. He has provided his fans insight and continuous reactions to the games taking place.

On a recent Twitter Q&A that LeBron conducted, he was asked who he thinks is the best player in the playoffs.

Best player left in the playoffs?

To which LeBron responded with not one but multiple players.

The 4-time NBA champion picked Stephen Curry, Luka Doncic, Jimmy Butler, Jayson Tatum, and Klay Thompson. He did add that there were more players, but clearly, he thinks these have 5 players have been better.

The LeBron James playoff picks have put on a show

Steph and Klay, the Splash Brothers, have run it back in style. After 2 years of not being in the playoffs, they have returned to make it right back to the conference finals. Curry has averaged 26.9 points and 5.6 assists in the playoffs while Thompson has 20.4 points a game after his injury layover.

Luka Doncic is returning the Mavericks to the pinnacle of their success in an unprecedented run. After the LA Clippers took advantage of the Mavericks’ inferior team in consecutive postseasons, Doncic won the first series of his career against the Utah Jazz.

He went on to exceed that performance by knocking out the number 1 seed, Phoenix Suns. Luka has averaged 31.5 points, 10.1 rebounds, and 6.6 assists for the Mavericks and is statistically the best player this postseason.

Jimmy Butler has quietly led the East’s top seed to the conference finals. Taking care of the flashier Philadelphia 76ers in the semifinals. His 28.7 points a night and 7.6 rebounds have boosted his team while they impose their classic defense on star-studded teams.

And Jayson Tatum is leading an imperious Boston Celtics back to the pinnacle of the league. The young superstar impressed in the first-round series against the Brooklyn Nets and their star power. He bested both Kyrie Irving and Kevin Durant, seasoned champions of the game.

But he only went to outdo himself against the defending champions, the Milwaukee Bucks. He is averaging 28.3 points, 6.1 assists, and 5.6 rebounds a game.

Which of these players will raise the championship trophy in the finals, only time will tell. But what we can be certain of is this isn’t the best we’ve seen of any of them. It’s going to get even better.