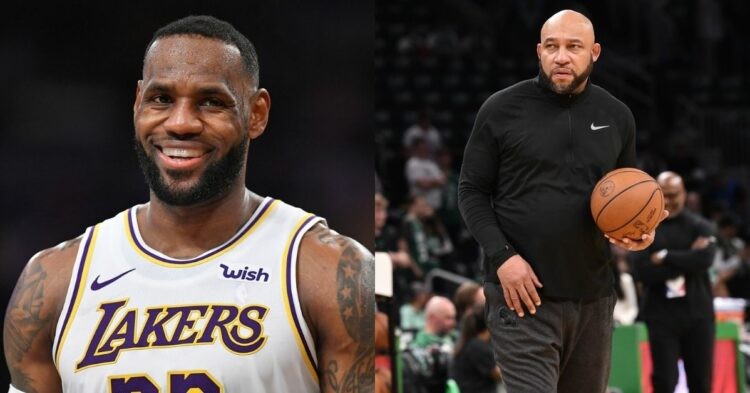 Darvin Ham has been selected as the new Los Angeles Lakers coach. He is a former NBA player and played against LeBron James in 2004. The Lakers hope to turn their season around with this new hire.

Los Angeles has come off a disappointing regular season. They have had many struggles this season. Coach Ham will have his work cut out for him. However, LeBron James thinks he can get the job done.

Coaching LeBron James and the Lakers is not an easy task

LeBron James has led 3 franchises to NBA titles over his career. However, he has also played a role in recruitment and trades involving his team. Apparently, LeBron was a pivotal factor in Russel Westbrook coming to the Lakers.

Westbrook was torn apart by the media and clowned with the nickname “Westbrick” for his subpar performance this season. There were already rumors in the air that the Lakers were looking to trade Russel by the trade deadline. However. this never came to fruition.

Russel has struggled to find his shot. Additionally, he has carelessly turned over the ball during pivotal possessions. This created a narrative that Westbrook was responsible for the Lakers’ failure.

The LA Lakers think Darvin Ham can turn things around

It is interesting to wonder how franchise owners interact with the game. Every fan and analyst had Westbrook or AD to blame for the Lakers’ failure. However, the top brass Jeanie Buss and company, decided that the problem was with the coaching and got rid of their previous coach Frank Vogel.

Frank had helped the Lakers win the NBA title back in 2020. However, he was let go under the notion that he was unable to “maximize” Westbrook.

Now, this may certainly be true to some extent. However, that was not the only problem with the Lakers. Even if Westbrook who was averaging 18 points 7 rebounds and 7 assists this season would not be able to score more than 10 points above that in any system.

The Lakers lost many games in a blowout manner, greater than 15 points. This was because they were simply too old and too slow. A system maximizing Westbrook might increase his output from 18 points a game to a solid 25.

This system could involve having him come off the bench or be a pure facilitator on offense. It could also rotate around having different players set screens for him and roll to the rim. That has what he has been good at for the majority of his career.

Coach Ham will certainly have a lot on his plate from the get-go. The only bonus he truly has on Frank is that he was an actual player in the NBA. Additionally, he has also gone to battle against King James. However, the modern game will show that good players are never good coaches.

Darvin Ham averaged 2 points and 2 rebounds and 0.5 steals playing 12.4 minutes in 7 NBA seasons. Therefore, he might turn out to be an excellent coach.