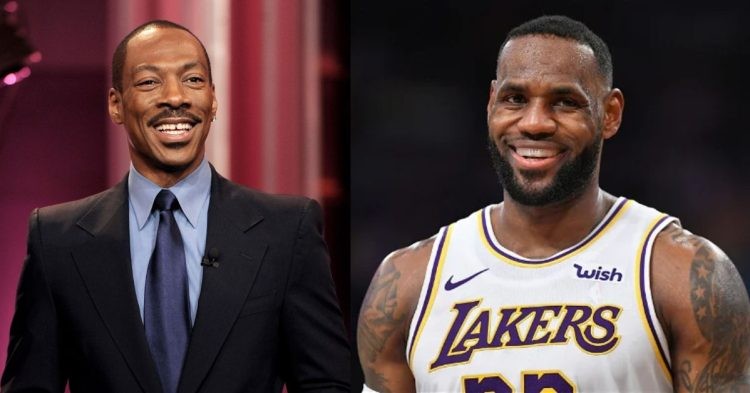 Despite having a successful NBA career, LeBron James has always stood up for and raised his voice on various social and racial issues. After all, he is an African American who has undergone some form of intolerance in his life. King James took to social media and shared a video of Eddie Murphy discussing the same kind of discrimination when hosting the Oscars.

Not many sports fans are familiar with who Eddie is. He is an American actor, comedian, writer, and singer. Murphy rose to fame for being a cast member of “Saturday Night Live“. It is important to know what he said to challenge the lack of representation for African Americans and what the 4x NBA champion felt when posting the same speech.

It is a well-established fact that LeBron is against racist ideologies and behavior. He was one of the largest supporters of the “Black Lives Matter” movement a few years ago. Additionally, he also uses his presence on Instagram, Twitter, and other forms of social media in order to impact his fan base. Whether the issue is vote suppression, police brutality, or just plain discrimination.

The King is certainly doing his part to help improve the situation in society. However, it is important to remember the people who started fighting against racial intolerance in the first place. One of those people is Eddie. He delivered a speech while presenting the award for best picture in 1988. Being one of the first people pioneering for change, he used dark humor and cynicism to sway the audience.

” They came to me and said they wanted me to present the award for best picture. My management came, told me, and picked me, my first reaction was to say no I ain’t going. My manager asked me why?… I said I’m not going because they haven’t recognized black people in the motion pictures. He was like what are you talking about? Black people win Oscars. I responded, well they won throughout the 60 years I think it was like Hallie McDaniel won the first one, then Sidney Poitier won one and Lou Gossett won one… the way it’s been going is about every 20 years we get one so we ain’t due for about 2004...”

LeBron loved the subtle message showing that discrimination exists in acting as well. That is why he chose to re-share the video on Twitter and bring attention to it.