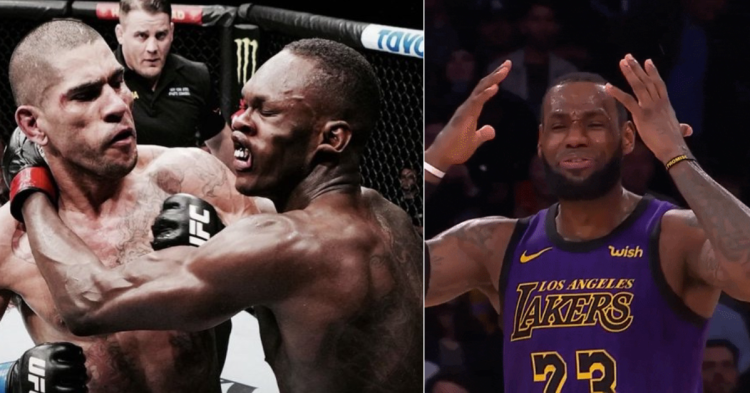 Only NBA superstar LeBron James could have predicted that Israel Adesanya would lose via TKO to Alex Perieria at UFC 281. It seems the King’s reputation of making somewhat untrue statements has now spread across the internet. In fact, it has gone beyond the NBA community and is being used for other sports like UFC as well.

Fans must be wondering more about these “memes” that have emerged from the statements made by LeBron over the years. Since he even claims to have predicted one of the greatest scoring performances of NBA history, the King now has a metaphorical target placed on his back by the internet community.

There is simply no other word to use. Due to modern-day resources, fans have been able to compile a list of every single time LeBron James has potentially lied to the camera. Usually, to look better or more knowledgeable and competent in some domain. Sometimes, the King may have just spoken without getting his story and facts together.

This led to the conception of a meme by UFC and NBA fans claiming that only LeBron James knew that Adesanya was going to lose at UFC 281.

I knew in 2010 that Israel Adesanya would lose to Alex Pereira eventually in the UFC #UFC281 pic.twitter.com/zJtIzvQ8cx

In any case, fans have found his ability to lie on camera quite amusing. Once, LeBron heard a football star share a quote that his coach told him,  “Put yourself in situations where you’re not comfortable.”

4 videos of Lebron lying for no reason pic.twitter.com/nZqi68xxMN

We should certainly wonder if that is really the King’s favorite quote in this whole world of deep analogies. Perhaps, he was just agreeing, but a bit too enthusiastically. Another time, LeBron was asked about football and a star scoring his first goal for Liverpool. It looks like he completely bluffed that answer as well.

“I definitely knew that.. Nah absolutely and I saw the clip of that too. I didn’t actually get an opportunity to see the game live. But I saw that he was able to score one in the match the other day. And I thought it was pretty unique the fact that he would do that and also be with Liverpool football club.”

Look at Cole’s face. LeBron lying about something 😭😭 pic.twitter.com/ByPgWMmPkt

Now that we know LeBron’s nature in these kinds of situations, we wonder if he actually would have predicted Izzy getting knocked out at UFC 281. Or if he even watches UFC.