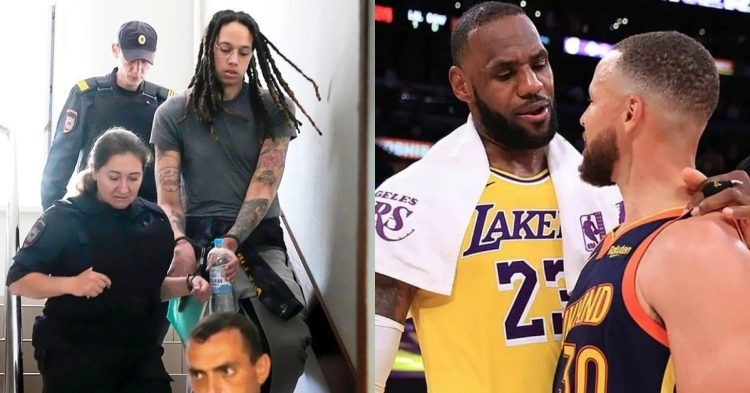 In sports, there are no barriers. It’s the one place, where all prejudices are put aside to work together and win big. With the Brittney Griner incident now reaching national importance, we have gotten the opportunity to see NBA players like LeBron James stand up together for a cause. And bring Griner back to her homeland.

Brittney Griner was arrested on 17th February 2022 at Sheremetyevo International Airport for possession of vape cartridges containing cannabis oil. She was there to play for UMMC Ekaterinburg, a team she’s been a part of since 2015. WNBA players earn very little money and have to make up that amount by playing overseas. The average WNBA player earns 1/10th of the amount an NBA rookie earns in the league.

LeBron James gets vocal for Griner

Brittney Griner was arrested nearly five months ago. However, on July 7th, she had to plead guilty in court to commit the crime.

“I’d like to plead guilty, your honour. But there was no intent. I didn’t want to break the law.”

BG admits that she committed the crime but blames it on an honest mistake. She’s been detained in the country. And could face up to 10 years of imprisonment depending on the verdict. However, she has made a public plea to the President of the USA. But she’s been heavily criticized for it due to her hypocrisy.

But the NBA is still sticking by the WNBA star. NBA superstar LeBron James tweeted out a petition to get BG back to the States.

We need to come together and help do whatever we possibly can to bring BG home quickly and safely!! 🙏🏾 Our voice as athletes is stronger together. @uninterrupted 👑 #WeAreBG pic.twitter.com/2GWV3Ff81p

Stephen Curry could be enjoying his 4th NBA title and first Finals MVP but is still focusing all his attention on Brittney Griner’s arrest and her family.

Man I hope Britney Griner is ok. That shit is not a game! Praying for her.

Even the Boston Celtics were attempting to ‘Free BG’ during the NBA playoffs.

These are just a taste of what support the NBA is trying to provide to this situation. Voices combined, make a louder noise and maybe this is exactly what could pressure the release of BG to take place.