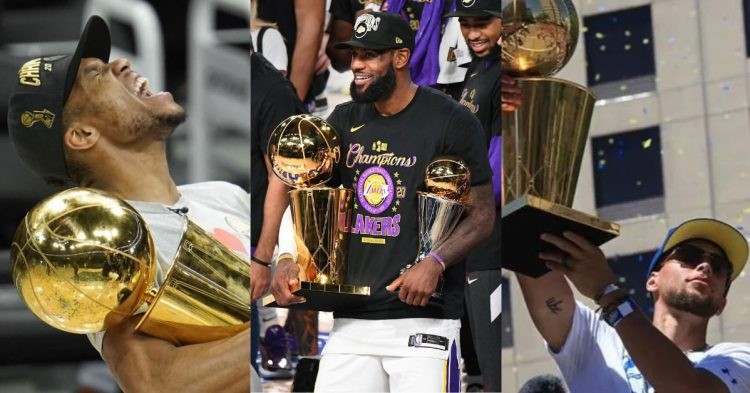 The NBA is the biggest basketball league in the world. The greatest athletes and talents come from here and thrive here. Jerry West has been ‘the Logo’ of the league since 1969 but the face of the NBA keeps changing. Currently, it’s a 3 man race between LeBron James, Stephen Curry, and Giannis Antetokounmpo. And no one has managed to take a huge lead so far.

Michael Jordan has been the most prominent face of the NBA despite how long ago he retired. LeBron James and Kobe Bryant, due to the growth in media, are a close second to Jordan. However, there is a lot of talent in the league. Electrifying dunks and amazing plays make players more beloved than can be imagined. The league is evolving and we are all getting to witness this.

Is LeBron James still the face of the NBA?

LeBron James was drafted straight out of high school in the 2003-04 season. In his 19 seasons, he has never averaged less than 20 points per game. He’s won everything that can be won under the sun. James has reached a level so high, that he cemented himself as the GOAT of our generation. However, King James is currently 37 years old and is not looking as scary as he once was.

LeBron’s body has been breaking down with injuries and his team is struggling without him. The Los Angeles Lakers did not even make the playoffs last season. During the King’s decline, there have been two players preying on the league. Those 2 are also coincidentally the last 2 NBA champions and Finals MVPs. Giannis Antetokounmpo and Stephen Curry.

Giannis Antetokounmpo might just be the greatest European player in NBA history. He’s not even been in the league for a decade but already has a Hall of Fame career. He brings in a huge audience and is the nicest and funniest guy in the NBA. Giannis has also been loyal and exciting to watch and has been rewarded for it by becoming an NBA champion. He can give you more than 30 points, 10 rebounds, and a blowout win on any given night.

Went to sleep on em! https://t.co/lKQdVv2Urx

However, this is a new era of basketball. One that depends on perimeter play and its creator is still in his prime. Stephen Curry is a 4-time NBA champion and the reigning finals MVP. He’s the only unanimous MVP in NBA history and his impact has changed the sport of basketball. Being the guy responsible for it, it’s the perfect example of the range of his impact. He’s loyal, funny, and a winner.

If I had to pick, though debatable, it would be Stephen Curry who currently is the face of the NBA.