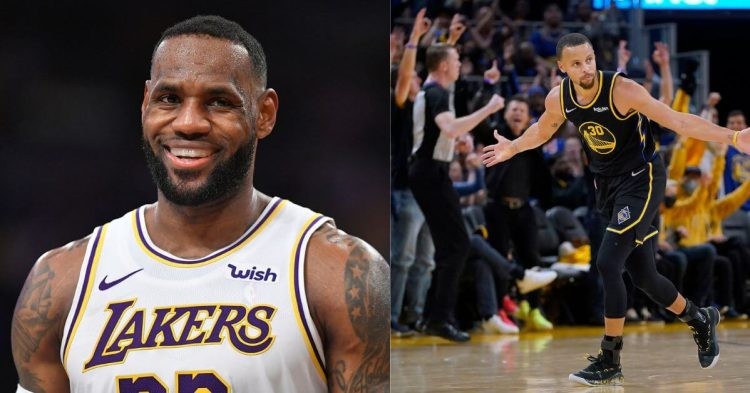 LeBron James and the Los Angeles Lakers have had a disappointing season. They were unable to make the NBA Playoffs. This has occurred twice in King James’s 4 years with the Lakers.

Stephen Curry and the Golden State Warriors have dominated the Western Conference this season. Curry is widely acknowledged as the greatest three-pointer shooter in the world. He seems to earn constant praise from LeBron James.

King James and Stephen Curry have faced off in the NBA postseason many times in the past. Therefore, one should wonder why LeBron keeps making indications of wanting to play with Steph.

LeBron may have dominated the NBA for longer than any player before has. However, in the past few years, Stephen Curry has had a greater impact on the game. His shooting ability, alongside top-tier handles and playmaking skills, makes Curry an unimaginable threat.

LeBron has explained plenty of times that he would like to play with Curry. However, this may not necessarily lead to a series of dominant championship runs. This is because their playstyles are unlikely to sync as expected.

Curry is a perfect product of the Golden State Warrior’s offense. His play has always seemed to center around unselfishness and constant movement. Additionally, he is always active and on the move whether he has the basketball or not. This is the type of offensive play that GSW coach Steve Kerr relies on the most.

Curry has a lightning-quick release speed. It must be near impossible to contest his shot on a regular basis. Despite not being incredibly athletic, he uses his speed and motor to create space to get clean looks and open shots.

King James revolutionized the teams he has been in

None of Curry’s achievements take away from what LeBron managed to do. Especially during his prime years. He has led every team he has been a part of to an NBA Championship. LeBron also played a role in the recruitment and trading for players he believed would give them the best chance at winning.

By that very logic, his teams for the majority of his career, at least with the Cavs and Lakers, were run through an offense centered around and approved off by King James. Therefore, it is highly unlikely he will be able to smoothly transition into the Golden State Warrior’s offense. It is all the more unlikely that the Warriors change their style of offense and risk losing Steph’s effectiveness to incorporate LeBron into the lineup.

Therefore, at the end of the day, LeBron can want to play with Steph. However, that will be more of an idealistic notion of perfection that he believes may work.