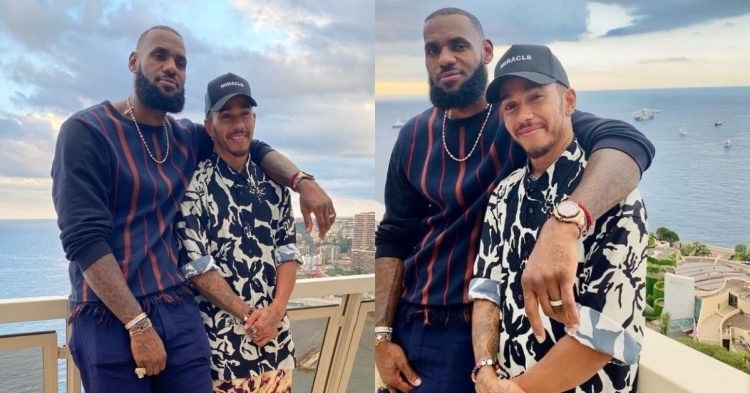 LeBron James has been enjoying the offseason not watching the playoffs from his couch but in Europe enjoying their sports. He was seen at the UEFA champions league finale between Liverpool and Real Madrid. The Lakers superstar is a minority owner of Liverpool and came out to support his guys. While he was there, he dropped by Monaco GP as well to support Lewis Hamilton.

Unlike basketball where the finale is a 7-game series, football seals the deal in just one game. After Liverpool lost 0-1 to Real Madrid, LeBron James made an appearance in one of the most exciting races of the year in Monaco. The King rarely ever misses the postseason but the last few years have been tough. His longevity is not enough to keep the Lakers afloat.

LeBron James was thrilled to see Lewis Hamilton in Monaco

Lewis Hamilton successfully defended his grid position while teammate George Russell continued his streak of finishing top 5 in every race. There’s no hiding the fact that the 7x champion is struggling this season. He hasn’t been on the podium yet, let alone win races.

LeBron James didn’t have a very good season either but their longevity is commendable. They’ve been competing in their respective sport for decades and recognize each other’s greatness.

Lewis Hamilton and the entire F1 crew were in Miami a couple of weeks ago for the inaugural GP in the south beach. The Mercedes driver met several American sports personalities including Tom Brady and Michael Jordan. Hamilton looks up to MJ like many from his generation and his choice in the GOAT debate is clear.

But that didn’t stop him from appreciating LeBron James for the kind of player he is. Jeff Van Gundy believes Lewis Hamilton is the LeBron James of F1 but he is closer to Jordan in terms of winning mentality and championship than LBJ.

Two legends linked up at the Monaco Grand Prix

LeBron James reciprocated the gesture on Instagram with the caption “BECOME LEGENDARY!! Good seeing you brother!!”. Although Bron missed Miami GP earlier this month, he attended one of the most anticipated races of the season in Monaco to get the complete F1 experience.