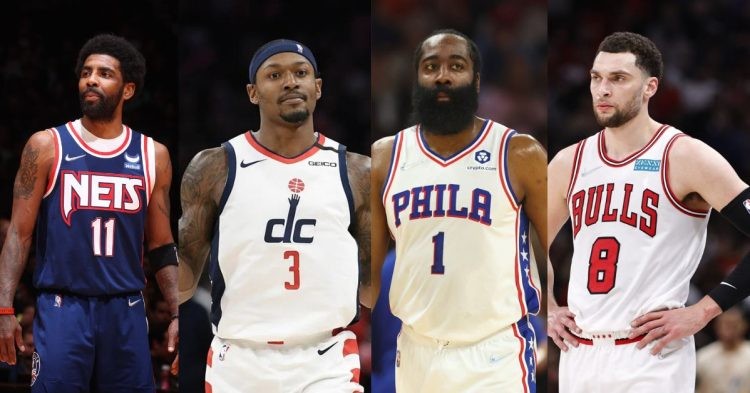 The start of the NBA free agency for 2022 has not been announced yet, but it is anticipated to be on 30th June. The salary cap for the upcoming season is set at $121m which is a $9m increase from the previous year.

Apart from the NBA Draft, there is some serious talent on the free agency list as well. Top prodigies, superstars, and generational talents, there is all on the list this time around. Let’s have a look at the biggest names who are without a contract going into the upcoming season.

The biggest names on the free agency list in 2022

We’re starting strong with some Kyrie Irving-Brooklyn Nets drama. The 30-year-old has a decision on his hands for the $36m player option that is available. Recent reports have emerged saying Kyrie may even sign a deal elsewhere as the contract negotiations with the Nets have reached a dead-end. Adding on to this, there is also interest in the Nets star from multiple franchises.

Next up, it’s Bradley Beal. The Wizards man has the player option for $36m. If he chooses to refuse it, he could secure a $245m deal for five years with his current team. However, he could also be seeing a deal for four years with another team that could see him pocket more than $175m. Reports also say that the Lakers have been keeping an eye on Beal.

It’s the one and only James Harden next. Although he mentioned in his first press conference that he would go ahead with his player option, we all know anything might happen in the NBA. His numbers have dropped since the move to Philly but he is still quite the player. There has been news that he is expecting himself to be with the Sixers next season. It’d be interesting to see if his team gets their worth for his deal; more than $250m for five years.

Zach LaVine‘s five years with the Chicago Bulls are as good as it gets. He has managed to put 24.4 points, 4.7 rebounds, and 4.4 assists on average per game. A max contract for Zach means that he would be able to earn more than $200m over half a decade. We all know The Bulls are going to try their best to keep hold of him. His offensive numbers speak for themselves and he portrays himself to be a winner.