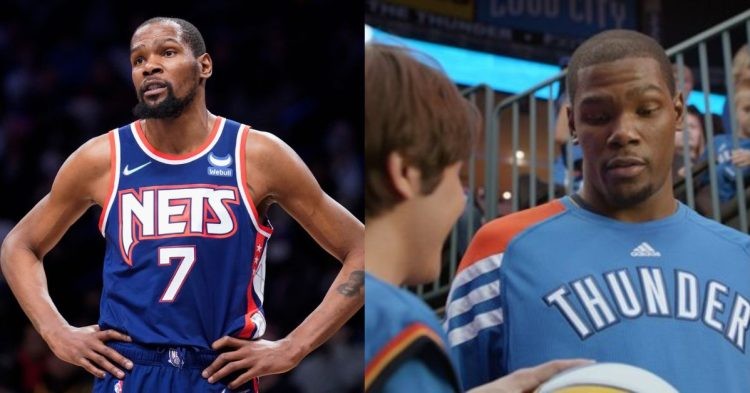 The movie industry has seen many world-class actors come and go over the years. NBA stars have also made it in front of the camera to expand their areas of expertise. One example would be LeBron James who acted in a number of movies & TV shows that were box office successes. There is also one more NBA star that has featured in movies and TV shows; Kevin Durant.

KD has been involved in many movies, but behind the camera as a producer. Although the number of projects he starred in is low, it is still good to see a basketballer hold his ground in front of thousands of people. Let’s have a look at the movies & TV shows the Brooklyn Nets star has acted in.

What is the best movie/TV show that Kevin Durant has acted in?

Kevin Durant has made cameos and short appearances in front of the camera. It is safe to say that he prefers to showcase his ideas from a producer’s perspective rather than as an actor. The best Kevin Durant starrer would have to be the short commercial Back For The Future. Nike released it as an advertisement to promote their new MAG shoes.

The short video had a salesman trying to convince Kevin Durant, who played a customer in the video. In the middle of their conversation, a man from the future popped up and realized that he traveled to the past. The commercial turned out to be a success from Nike’s perspective. They only made 1500 pairs, and auctioned them all on eBay, for more than an estimated $4 million. Today, the shoes sell for more than what was the initial selling price.

Many would have expected to see Thunderstruck at the top. However, the movie did not perform well at the box office. It collected less than $600,000 in ticket sales domestically.

If that wasn’t bad enough, the rating for the movie on IMDb is just 5.1. The movie’s poor performance prompted KD to come out and say that he would never act again. However, he returned to feature in a cameo for the TV show Billions, which was the last project he acted in.

KD has been successful on the court, but the projects he chooses could be better. His former teammate Steph Curry has also starred in movies & TV shows which have turned out to be successful. Perhaps he could get some advice from him if he moves back to the Warriors.