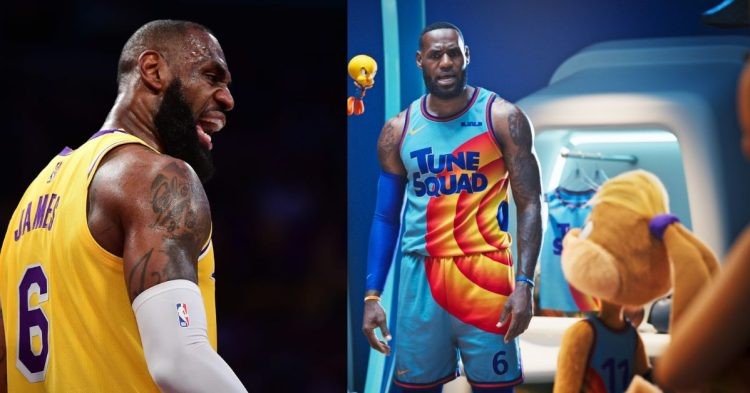 LeBron James has been one of the most influential athletes on the planet for the past decade. Although the Lakers star has moved multiple teams, his popularity has only seen a rise. Only Michael Jordan, together with Kobe Bryant can rival LeBron for the legacy they have built outside basketball.
LeBron, just like MJ, acted in Space Jam. The only difference is that Jordan starred in the prequel of Space Jam 2, which LeBron acted in. LeBron seems to have taken the direct successive footsteps of the GOAT if he wasn’t one already.
King James has expanded his horizon from the court to the film sets in the last few years. From Simpsons to Space Jam, he has been part of the film industry for more than a decade. Let’s take a look at the list of movies and TV shows he has been a part of as an actor.

LeBron has mostly stuck to playing himself in the movies, as he keeps it simple. He has appeared in cameos for most of the projects in the list above, apart from a few. He played a character called Gwangi in Smallfoot, a movie that was distributed by the world-famous Warner Bros. Pictures.

What is the best movie/TV show LeBron James has acted in?

LBJ is mostly seen for only a couple of minutes on screen. However, despite this, the movie seems to have been uplifted by his presence. Not many can boast saying that they have made a lasting impact on a movie even after only appearing for a while.

Trainwreck is one of the movies where he had a major scene. He was obviously playing as himself on screen again. However, this time, he was playing basketball against another character. He got scored on, which you don’t get to see often. It would be magical for any normal person to go through that.

LeBron’s best movie as an actor would be Smallfoot. The movie revolves around a Yeti called Migo who discovers humans exist. James plays another Yeti in the movie, which would demand much from anyone playing the character. The HOF great’s vocal performances were said to be exceptional that you wouldn’t be able to tell that an actor didn’t play the character. We can be sure that the King would not stop here, and would only continue.