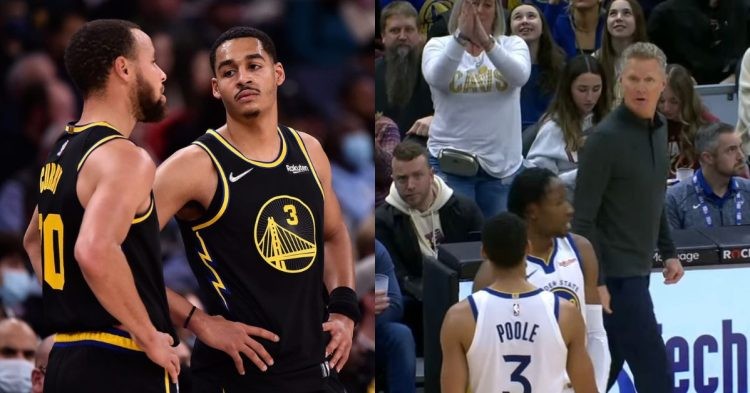 The Golden State Warriors won against the Cleveland Cavaliers last night. Jordan Poole was the star of the night in Stephen Curry and Klay Thompson’s absence. The 32 points he put up on the board help the defending champs win the game 120-114.

Many believed that the Cavs might take the win easily considering the fact that GSW did not have four of their starters. It would be safe for us to claim that the NBA world was left baffled after the youngsters managed to get the job done on the night. However, that was not all that caught the attention of fans.

What did Steve Kerr say to Jordan Poole after his technical foul?

The Warriors were up by 13 points at that point, but Kerr knew that the Cavs had the ability to fight back even without Donovan Mitchell. Kerr reportedly said to Poole, “Lock the f**k in, we’re trying to win the game.” The NBA community was surprised to witness his reactions despite being up by a decent margin.

Jordan Poole got hit for a delay of game after an offensive foul he disagreed with late third quarter. Steve Kerr got on him: “Lock the f*** in. We’re trying to win the game.” Tense near Warriors bench through quarter timeout. They could really use this W. pic.twitter.com/2wQXU2jQnl

Warriors superstar Stephen Curry came to Kerr’s defense and pointed out that it was normal. He commented under an Instagram post, “Hey for all the kids watching this clip…Coach Kerr coaching like he should. JP taking the energy the right way. Both of them move on to try and win the game!!! [House Of Highlights] Make sure you show how [Jordan Poole] bounced back after this.”

As Steph mentioned, it was just an interaction between a player and a coach. During the post-game interview, Poole mentioned that it was just competitive individuals who had their eyes set on the win.

Here is Jordan Poole on his interaction with Steve Kerr after the delay of game: “High emotions. Later in the game. I think everyone wants it.” pic.twitter.com/YebRWBcv9B

That wasn’t all, Kerr also admitted that he “snapped” after the whistle was blown. He admitted that Poole was caught off guard by his reaction, but made sure to put all the rumors of a rift between the pair to bed when he said that he loved the way the Warriors hotshot was playing. Steph, Klay, Dray, and Andrew Wiggins all sat out for this game and their return dates are still unknown.

Steve Kerr on getting on Jordan Poole for his technical foul: “I snapped in that moment and he looked at me like I was nuts. … I love Jordan and I love the way he’s playing. He was incredible tonight.”

But Warriors fans will be delighted to know that their roster has enough firepower to take down the big guns. However, the NBA world would still expect Steph to return soon, considering the form he has been in recently.