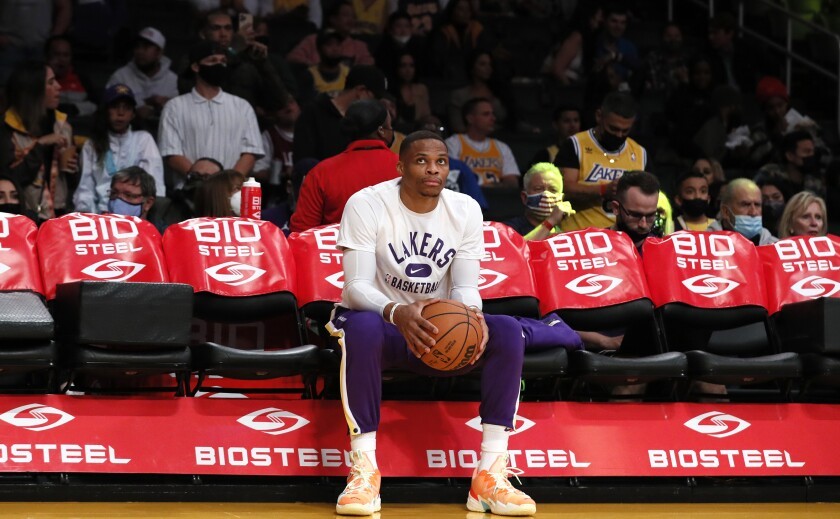 The Los Angeles Lakers have come off a rare win against the Golden State Warriors. A game where LeBron turned back the clock. LeBron scored 56 points and got 10 rebounds and took down the 2nd best team in the league. This also ended the Lakers’ embarrassing losing streak. Russell Westbrook too had a game with a decent shooting percentage showing that his fit on the Lakers could work out at times.

Russell Westbrook is a type of star that thrives with worse players around him rather than the best players in the league. All the times he’s played with another star, the team he’d play on would struggle a lot.

This season he averaged less than 20 points per game for the first time since the 09-10 season. He’s also averaging much lower assists and rebounds from last season and is shooting more inefficiently even though he’s taking fewer shots. Here is what the Lakers want to do to increase his production and reduce the harm

Russell Westbrook to ride the bench?

There are a couple of reasons as to why Russell Westbrook coming off the bench makes a lot of sense for the Lakers. For one, with LeBron James playing alongside Westbrook, there is not enough time for the ball to be in Westbrooks’s hand. If Russ leads the bench unit, he would be the primary ball-handler. This would also give LeBron more time to recuperate on the bench.

For the starting lineup, the Lakers could move up some shooters in the 5 will even maximize LeBron James’ production in facilitating the games. Another reason is that there are chemistry issues with Vogel and Westbrook because of some lackluster defense.

With the chip on his shoulder of being a bench player and trying t0 work his way back into the lineup, the effort on both ends of the floor from Westbrook will increase.

The one thing we all know about Westbrook is that when he feels the need to prove himself is when he does unthinkably amazing things on the court. As much as the ego will come in the way of Russ, overall, this could be what gets the Lakers in the NBA playoffs.