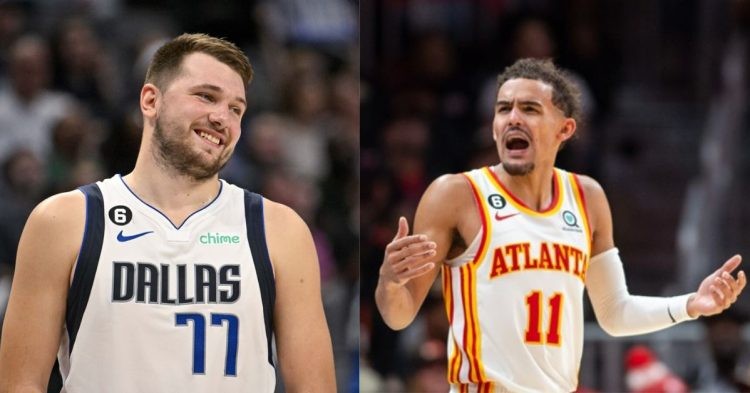 Luka Doncic and Trae Young have already been through a trade. Back in 2018, the Dallas Mavericks and Atlanta Hawks swapped players after draft night. Both players showed significant potential and held the weight of bearing a franchise on their shoulders from the get-go.

Here we are 4 years later and it looks like the Dallas Mavericks look to be the clear-cut winners in this landmark trade that revolutionized the franchise. Luka is proving to be one of the best players in the league at the moment. While Trae seems to be in conflict with his team. We should compare their situations and take an in-depth look at the events occurred so far.

Young has certainly shown a sense of appreciation for Luka Doncic. Some of us might be aware of his recent feud with team management and the following disarray in the team. He has listed the Mavericks as his top choice as a team to play for.

Some of the other teams Young is also rumored to be considering include the Miami Heat, Los Angeles Lakers, and Boston Celtics. These teams do not have a star-studded point guard and Young would certainly be able to fit into the system.

However, that is where things get interesting when it comes to joining the Mavs. Both Trae and Luka and extremely ball-dominant players in the guard position. Additionally, neither of them is particularly good when it comes to off-ball movements. Therefore, this move would only work if Young came off the bench and lessened the burden on Doncic.

There is also no denying that the team would rather have the ball in Doncic’s hands, merely due to his size, passing and scoring abilities. The numbers also prove that he is better than Young. According to the statistics, Luka is averaging 33.7 points, 8.8 rebounds, and 8.9 assists, shooting an efficient 50.7% from the field and 35.8% from the three-point line.

On the other hand, Trae is averaging 27.3 points, 2.8 rebounds, and 9.9 assists. He is shooting 41.4% from the field and 31.6 from the three-point line. In terms of scoring and rebounding Luka is significantly better than Young, both this season and throughout his career so far. If this trade does go down, it is possible one of them can’t play the way they used to and have a diminished impact.