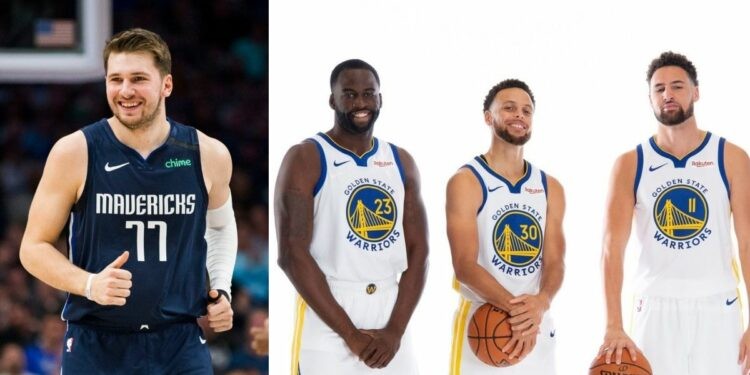 Luka Doncic and the Golden State Warriors via Twitter

The Dallas Mavericks avoided the unenviable sweep in the Western Conference finals against the Golden State Warriors. A series that seemed to go in favor of the Warriors at every step finally went the way of the Mavericks in Game 4. Much in part due to Luka Doncic and his persistent exploits.

The Mavericks started off their first conference finals in 11 years in the worst way possible. After crumbling at the Chase Center to the Warriors, their misery was compounded in Game 2. The Mavs took off with an early lead in Game 2, a collapse ensued in the second half. The double-digit lead was soon overturned by Stephen Curry and co. Subsequently, they went on to take Game 2 on home soil too.

The Mavericks had been in this situation before and the signs were there in terms of performance. They came back from a similar deficit against the Phoenix Suns. Therefore, the alarm bells weren’t rung yet. But home-court held a similar fate for the Dallas Mavericks. Game 3 was a tough one for the Mavericks yet again.

The Mavericks trailed the Warriors 3-0 and the series finally seemed out of reach. All that was left was to avoid the sweep now.

Game 4 Mavericks performed very akin to their Game 2 first half and sped to a 29-point lead before the second half. Luka Doncic ended the night on 30 points, 14 rebounds, and 9 assists as he continues to better his elimination game averages. The Dallas Mavericks are 3-0 this postseason in elimination games.

The question that looms large now is can the Mavericks pull off the impossible. In the NBA’s illustrious 75-year history, 146 teams have trailed 3-0 in a playoff series. Not a single one of them has ever come back to win the series. Luka Doncic was asked if his team could be the first to do so.

“You never know, man.”@luka7doncic talked to @ALaForce about possibly being the first team to come back from a 0-3 series deficit after the @dallasmavs‘ Game 4 win. pic.twitter.com/ylfjdTh8HR

Will they create history led by a once-in-a-lifetime player in Luka Doncic? Or will the seasoned Warriors see them out?