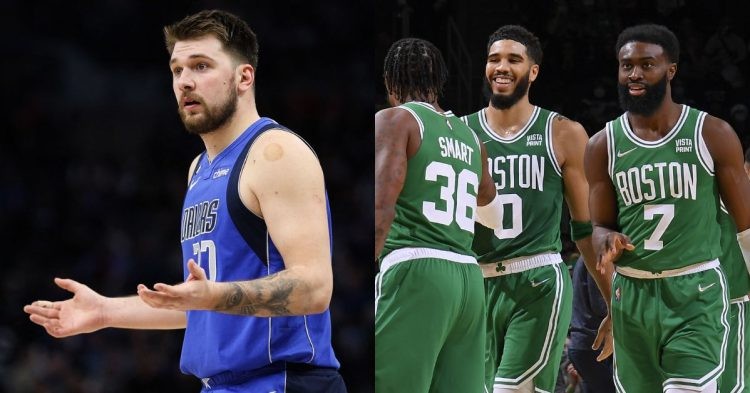 Luka Doncic has been playing at a very high level for the Dallas Mavericks as of late. The 23-year-old star point guard is averaging 34, 8, and 8 and is firmly positioned in the MVP race this season. Mavericks are currently holding the 4th seed in the competitive Western Conference with a 22-17 record and will be looking to make a deep run in the playoffs this season.

Despite their elevated play this season, fans and the media have still found a way to downplay their record. It is being said that this record has been a result of the Mavs’ easy schedule and most of their wins so far have come off teams with an under .500 record.

Do Luka Doncic and the Mavs only win against easy opponents?

At a pre-game presser before their matchup against the Boston Celtics, who are playing elite basketball this season and are sitting atop the Eastern Conference, Luka was asked whether the result of that game would be a good measure to gauge their ability to win against tough opponents.

Luka Doncic, on if playing the Celtics will be a better measure than the recent below .500 opponents: “No. We’re famous for not winning games against those teams. And now we’re winning, and they say they’re not above .500. … We just go into every game and try to win it…” pic.twitter.com/iKy528lTI5

Doncic was quick to dismiss that proposition, stating that their focus was only on winning games, be it against below or above .500 teams. He added, “We’re famous for not winning games against those teams. And now we’re winning, and they say they’re not above .500.”

The much-anticipated matchup between Celtics’ Jayson Tatum and Mavs’ Luka Doncic seemed to have gone in favor of Tatum as he helped rally his team past the Mavs. Winning with a final score of 124-95, the Cs were in complete control during the whole game, outscoring the Mavs in each quarter and playing tough team defense.

This is how you want to stop Luka Doncic – Boston Celtics edition pic.twitter.com/03guq0jaNg

Their attack was led by another MVP candidate in Jayson Tatum, who posted a 29-point triple-double. Role players Marcus Smart and Malcolm Brogdon also scored 15 points each, shooting the 3-ball efficiently. The Celtics not only swept the season series against the Mavs but also managed to end their 7-game winning streak, with all of those wins coming against teams below .500.

“It was kind of like what happened in Boston,” Mavs coach Jason Kidd said after the game. “We just couldn’t score. We had some great looks there early. The ball just didn’t fall for us.”

While it may just be one game, the Celtics might just have given Luka and his Mavs a reality check with the way they won this game, never trailing after the middle of the first quarter and comfortably taking home the W.